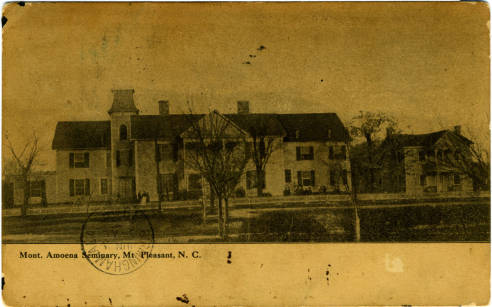 Mont Amoena Seminary in Cabarrus County was founded by Mrs. D. H. Bittle in 1859, under the name Mount Pleasant Female Seminary, as a private liberal arts academy for girls of high school age. It first consisted of one two-story frame building. The school was acquired by the North Carolina Lutheran Synod in 1869 and continued to educate both day students and boarders in fields including English, Latin, mathematics, and music. Many of its headmasters were Lutheran ministers. After the Civil War, it became popular with parents in Concord, and according to one source "was an island of culture in the difficult years" that followed the war.

In 1892 the school's name was changed to Mont Amoena Seminary, the name being the Latin equivalent of Mount Pleasant, the location of the school. The school's original multipurpose frame building was destroyed by fire in November 1911, and a new three-story brick building with white columns and modern amenities was constructed on seven acres near the old site at a cost of $30,000.