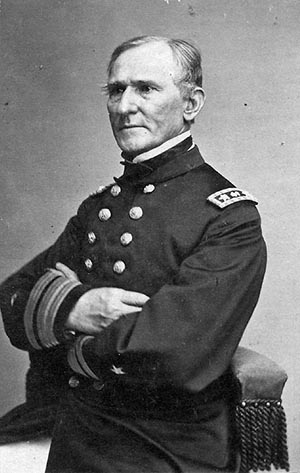 Upon his appointment as a midshipman, he served aboard the Grampus, where in 1828–29 he aided in clearing the Cuban coast of pirates. He next served with the East Indian Squadron for a number of years and in 1856 commanded the flagship of the squadron, San Jacinto. Revenging an insult upon the American flag, he took a prominent part in the capture and destruction of the barrier forts near Canton, China. He was in command of one wing of a landing party from the fleet that stormed the first fort and held it until the following day, when the remainder of the fleet shelled the other forts into submission. When he returned to the United States, he had secured a reputation as a brave and high-spirited officer; he held the rank of captain and was on a quiet shore leave when the storm of Civil War burst upon the country.

At the outbreak of the Civil War, Bell was compelled to make the decision between devotion to his native state and loyalty to the flag under which he had served long and honorably. Many factors claimed his allegiance to the southern Confederacy. He was a native North Carolinian and had a large and influential family there, to whom he was most affectionately attached. His wife's family, of Virginia, contained several distinguished southern politicians and was connected with the secession leadership in that state. However, Bell's strong and disciplined sense of duty, forever in turmoil with other considerations, overpowered the devotion he felt for his native state. His friend Edward A. Pollard wrote that an attempted conversation on the subject was cut short by Bell's emphatic and decisive declaration, "I have made up my mind; I shall stand by the flag."

At the beginning of the Civil War he was appointed fleet captain of the West Gulf Squadron under Admiral D. G. Farragut. His first important assignment of the war was given at New Orleans: upon its capture, Farragut chose Bell to confront the riotous mobs in the city and raise the American flag above the Custom House.

After the events in New Orleans, Bell took part in the operations on the Mississippi River, including the siege of Vicksburg. In 1863 he was, for a time, in command of the West Gulf Squadron, Admiral Farragut having been relieved and Admiral Porter having command of the western waters above New Orleans. Bell's blockading fleet stretched from Mobile to Galveston. In 1865, his health failing, he was placed in command of the Brooklyn Navy Yard. He was ordered to command the East India Squadron later that year and was active in subduing pirates infesting the China seas. On 25 July 1866 he was appointed rear admiral. In 1867, at his own request, he was placed on the retirement list. While awaiting his relief, he was drowned when his barge, from the U.S. steamer Hartford, capsized on a bar as he was attempting to enter the Yodo River. He was buried at Hiogo, Japan, with American and British squadrons taking part in the funeral ceremonies.

Before the Civil War, Bell was an unwavering Democrat, and his sympathies were in entire opposition to the anti-slavery party. Records reveal that he was an active member in the Shanghai Episcopal Church of Our Savior in Japan. Letters from Bell to a son remain; however, the son's name is not mentioned, nor is any other person except for Mrs. Bell. The son was born 22 Apr. 1855. Bell's widow died in 1886.