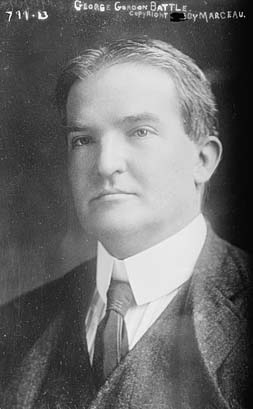 George Gordon Battle, leading Democrat and one of New York City's outstanding lawyers, was born at Cool Spring Plantation near Rocky Mount in Edgecombe County, the son of Captain Turner Westray Battle and Lavinia Bassett Daniel Battle of Halifax, daughter of Joseph J. Daniel, associate justice of the North Carolina Supreme Court. George Gordon's father was a cotton planter, whose forebears in 1747 immigrated to Edgecombe County on the Tar River from Nansemond County, Va., where Battles from England had settled in 1653 and 1654.

Battle's youth was spent on the plantation. At the age of thirteen, he was sent to The University of North Carolina, which he attended for a year and a half in 1881–82. From 1883 to 1886 he studied at Hanover Academy in Virginia; in 1889 he received his M.A. from the University of Virginia. While in Virginia he began studying law, and after graduation he continued in the office of his oldest brother, Judge Jacob Battle, in Rocky Mount. However, a short while later he decided to enter law school at Columbia University in New York City.

He was a brilliant student at Columbia, with an aptitude for the framing of indictments that won him a post with District Attorney De Lancey Nicoll, who had asked the law faculty to recommend an assistant. He served in the district attorney's office for five years, from 1892 to 1897, resigning to enter private practice. Twice in later years he served as special assistant district attorney to investigate crime and corruption in New York, in 1911 and again in 1919.

Among the better-known lawsuits in which he was engaged as counsel was one brought by George H. Carle, later governor of Pennsylvania, as receiver for the Pennsylvania Sugar Refining Company, against the American Sugar Refining Company for violation of the Sherman Anti-Trust Act. In another important suit, he was counsel for the minority stockholders of the Houston Central Railway, who, after litigation lasting thirty-five years, finally won a decision from the U.S. Supreme Court upholding a $6,600,000 verdict. Battle was defense attorney for Earl Browder, then general secretary of the Communist party in the United States. He represented such concerns as the Diamond Match Company and was attorney in many prominent will suits.

Battle raised money for such diverse beneficiaries as the Salvation Army, Sweet Briar College, the Passion Players from Oberammergau, the Royal Arch Masons, and the Sesquicentennial Celebration of the American Revolution in Philadelphia. He was executive chairman of the Community Council of National Defense for the City of New York, secretary of the Committee on Educational Publicity in Interests of World Peace, and chairman of the Committee on Psychiatric Work for the Girls Service League of America. On several occasions he arbitrated major labor disputes, and he was chairman of the National Committee on Prison Labor Reform.

As president of New York City's Parks and Playgrounds Association, he was an ardent fighter against encroachments upon park property, especially Central Park, which he felt should be kept as rural as possible. Himself childless, he continually sought more city playgrounds.

While campaigning for Al Smith in 1928, he began fighting anti-Semitism; later he served on several Jewish committees. An editorial in the American Hebrew hailed him as one of the most effective espousers of the cause of Jewry among New York gentiles, and he was awarded the American Hebrew medal for keeping "the flame of religious hatred from searing American Democracy."

He was married in Richmond, Va., 12 Apr. 1898, to Martha Burrell Dabney Bagby, the daughter of George William Bagby, for many years state librarian of Virginia, and Lucy Parke Chamberlayne. Both the Battles were devoted members of the Episcopal church.

Battle suffered a fatal heart attack while on his way to his country home in Orange County, Va., and was buried in Hollywood Cemetery, Richmond, Va. Three portraits exist: one in his law office in New York, one in the Nash County Courthouse in Nashville, and another with a niece in Rocky Mount.

I have a photo of Lt. John

I have a photo of Lt. John Manning Battle, A.E.F. , in his Sam Brown belt uniform in the field, framed and hanging in my law office. I also discovered a photo online of “Uncle George” in white tie and tails with wife Martha I can send if interested. FREDERICK MANN, Atlanta. E: fritzmann6.35@att.net

Battle’s brother was Gaston Battle, my great grandfather. Gaston had a son named JOHN MANNING BATTLE. He also went to law school, at Fordham, in NYC. Upon passing the NY Bar he also served as an Assistant Da in Manhattan. He then went into private practice with Uncle George, before joining the American Expeditionary Force to fight in France in 1918. He was killed in battle there in July 1918 and is buried at Oise/ Aisne American Cemetery.

The citation for the New