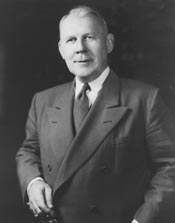 Graham Arthur Barden, congressman, was born in Turkey Township, Sampson County, the son of James Jefferson Barden and Mary Robinson James. He grew up in Pender County, served as a seaman in the navy during 1918 and 1919, was graduated in law from The University of North Carolina in 1920, and that same year began practice in New Bern. There, he also taught in high school and was a colorful and popular football coach.

At the university, he played in the first football game he ever witnessed with the first football he had ever seen. He starred as a varsity regular. He later coached New Bern teams to championship finals in football, baseball, and basketball, although he was familiar only with football. College teammates said no scrimmage got rough enough for him, no score one-sided enough, to ruffle the happy-go-lucky disposition that earned him the nickname "Happy."

His disposition made him a natural vote-getter, and "Hap" Barden progressed from Craven County judge (1920–24) to state legislator (1933) to congressman (3 Jan. 1935). In the General Assembly, he successfully sponsored a bill making salary payments standard for teachers, regardless of race.

When he announced that he would retire as of 3 Jan. 1961, after a career during which he headed the Education and Labor Committee for a decade, more than one hundred colleagues in the House of Representatives met together to beg him to reconsider his decision and remain in Congress. Distinguished Americans from every area of the nation joined in this plea, but to no avail: although he did not reveal it at that time, ill health had 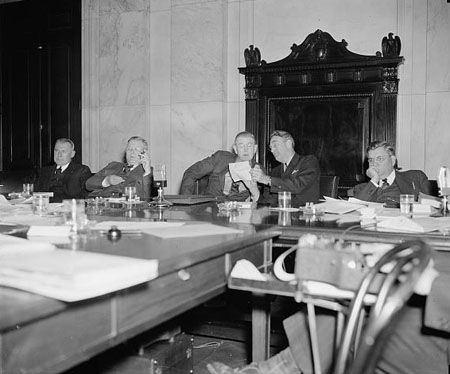 One of his accomplishments was preparation of legislation expanding the vocational education program throughout the nation. He also was instrumental in the passage of the Barden-La Follette Act, which makes vocational training possible for all types of physically handicapped people. Barden led in the passage of the Taft-Hartley Act and the Landrum-Griffin Act, designed to control corruption in labor unions. He was author of Section 14 (b), the "Right-to Work" provision, of the Taft-Hartley Act, which barely survived one of the bitterest assaults ever to explode in Congress.

For years, Barden stoutly resisted federal intrusion into public schools and predicted, accurately, that federal aid would lead to federal control of education. In 1949 his proposal to aid public education while specifically excluding parochial and private schools embroiled him in a quarrel with Cardinal Spellman, who called him "a new apostle of bigotry." Barden found his outstanding defender in this instance in the liberal wing of the party. She was Eleanor Roosevelt. Time and the courts supported his position.

Lawmakers who clamored for instant cures to social issues often charged Barden with being ultra-conservative, anti-union, and lazy. He replied, in a favorite quotation, that he "never knew the Republic to be endangered by a bill that was not passed." Labor lobbyists found him amiable, if not cooperative; and perceiving the wisdom of not overstraining his "happy" nature, they usually refrained from criticizing him and bided their time. 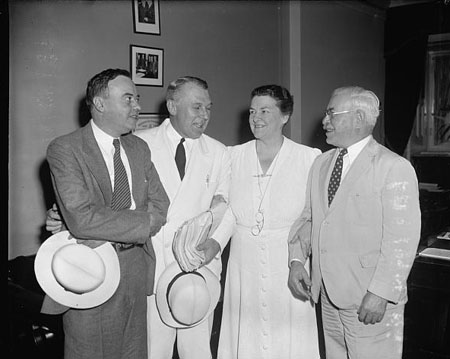 Homefolks who appreciated his stances elected him to Congress for thirteen terms with virtually no campaigning on his part. The district benefited. Camp Davis was established there as a temporary army base during World War II; and his district attracted three of the four major military bases in North Carolina; Camp Lejeune for Marines in Onslow County, the Cherry Point Marine Air Station in Craven County, and SAC's Seymour Johnson Air Force Base in Wayne County.

Those who enjoyed the hospitality of the Barden home along the Trent River near New Bern, where he and Agnes Foy Barden raised a son, Dr. Graham A., Jr., and a daughter, Mrs. David S. Sabiston, revel in recollections of his disposition. The Trent River was his fishing ground, offering release from congressional pressures.

Barden died after seven quiet years of retirement and was buried in Cedar Grove Cemetery, near the New Bern First Presbyterian Church, where funeral rites were held.

The idea of the Barden Chair of Government at Campbell College won wide editorial endorsement. The Goldsboro News-Argus observed: "The committee organized to raise the needed funds is comprised of men of all faiths, and particularly of men who appreciate the sound government principles which Graham Barden followed all his life. This type of memorial is most fitting for Graham Barden."