James Atkins, Jr., Methodist clergyman, was born at Knoxville, Tenn., the son of a Methodist preacher who served his church almost half a century and was elected a delegate to the general conference six times. After Atkins's education was interrupted by the Civil War, he received the M.A. degree from Emory and Henry College and later the D.D. degree from Trinity College (now Duke University).

Atkins served his church in several capacities. In 1872 he was admitted on trial in the Holston Conference of the Methodist Episcopal Church, South, and was appointed to Morristown and Mossy Creek. Between 1873 and 1878 he served Jonesboro, Abingdon, and Asheville as pastor. In 1879 he served as president of Asheville Female College, which closed 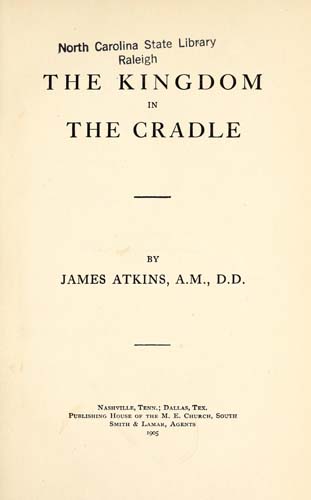 permanently in 1901, and in 1889 he became president of Emory and Henry College. In 1893 he returned to the Asheville Female College and remained there three years. In 1896 he was elected general secretary of the Sunday school board and editor of Sunday school literature, serving with distinction for ten years. He wrote a notable book, entitled The Kingdom in the Cradle, which advanced the concept of training young people into the Christian life without the radical conversion experience that had been regarded as essential. It had far-reaching influence across the denomination; revivals gave way to "preaching missions" for spiritual growth of church members.

In 1906, Atkins was elected a bishop at the General Conference of the Methodist Episcopal Church, South, in Birmingham, Ala. He exercised supervision over conferences across the country, including the Pacific Coast, always maintaining Waynesville as his home. In 1918–19 he was chairman of the Centenary Commission and helped raise $50 million for home and foreign missions. As a result of this effort, missions were established in Belgium, Poland, and Czechoslovakia. For four years he supervised work in these fields.

In 1913, Atkins was instrumental in establishing the Southern Assembly and choosing Lake Junaluska, near Waynesville, as its site. He was the first chairman of the board of trustees and erected two houses at the site. His son operated the institution from 1933 to 1938, when the indebtedness was paid, and the assembly was accepted as the property of the Methodist Episcopal Church, South.

In 1876 he married Ella M. Branner by whom he had four children; after her death he married Eva Rhodes in 1921. Bishop Atkins was buried at Waynesville.