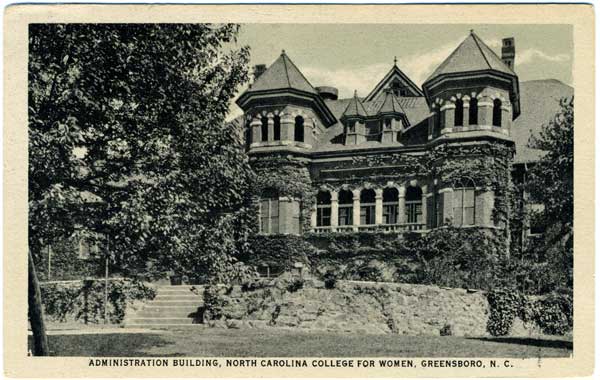 Alex Mathews Arnett, historian and teacher, was born near Sylvania, Ga., the fourth son in a family of six children. His father, Hamilton John Arnett, was well known in Sylvania for his work as schoolteacher, Baptist pastor, tax collector, and county superintendent of schools. Less is known of Alex's mother, Georgia Anne Dixon Arnett, who shared in her husband's religious endeavors and was active in the Baptist Women's Missionary Society. She died when Alex was only seven years old, and his father married Joanna O. Ennis in 1897.

None of Hamilton Arnett's children followed him into the ministry. Alex, however, like his father became a teacher. In 1908 he received his B.A. degree from Baptist-sponsored Mercer University in Macon, Ga., where his father had studied thirty-five years earlier. From 1908 to 1912 he taught English and history in high schools in Millen and Americus, Ga.

The next two years were turning points in Arnett's career. In 1912 he accepted a position teaching history at Shorter College in Rome, Ga., and in 1913 he received his M.A. degree from Columbia University. While at Shorter, he met Ethel Stephens of Ball Ground, Ga., and they were married in 1916. They had two daughters, Georgia Anne and Dorothy Stephens.

Arnett stayed at Shorter until 1917, when he accepted a position as instructor in history at Columbia and began work on his doctorate. He received his Ph.D. in 1922. He then taught for a year at Furman University in Greenville, S.C. From 1923 until his death he taught at North Carolina College for Women in Greensboro.

Arnett's years at Columbia were important in his professional career and intellectual growth. He developed a close friendship with his mentor, Benjamin Burks Kendrick, a fellow Georgian. Arnett decided to leave Furman for the Women's College partly because Kendrick had decided to teach there. They worked closely together and coauthored The South Looks at Its Past (1935). Arnett's approach to American history, like Kendrick's, was deeply influenced by the work of Charles Beard. Although Beard left Columbia in 1917 in protest against wartime infringements on academic freedom, his influence on his colleagues and students remained strong. Beard's writings were one of the cornerstones of the progressive interpretation that dominated studies in American history until after World War II. Each of Arnett's studies reflects the pervasive influence and basic assumptions of the progressive view—the emphasis on economic factors in determining behavior and on the conflicts between haves and have-nots, between capitalists and agrarians, as the source of historical change. In addition, Arnett and his fellow progressive historians thought that out of this conflict would emerge a more egalitarian and democratic America. Arnett's Populist Movement in Georgia: A View of The "Agrarian Crusade" in the Light of Solid South Politics (1922), The South Looks at Its Past (1935), and Claude Kitchin and the Wilson War Policies (1937) were all written within the progressive framework. They also reflect Arnett's special interest in the South, its history and problems, its identity and character. 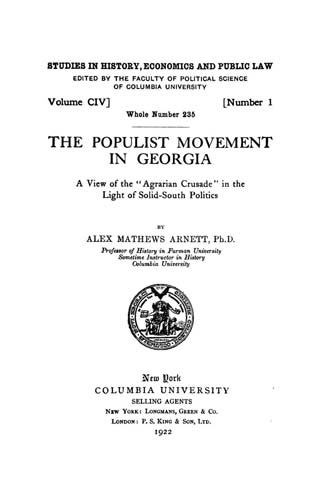 The Populist Movement in Georgia was a pioneering work in the field. Earlier studies had viewed populism with more hostility than scholarship and identified it almost exclusively with the western states. Thus, Arnett's study was more than a narrow monograph; it was the first balanced study of populism. Despite some notable attempts to revise historical opinion of the Populists, Arnett's work, although enlarged upon, has not been substantially challenged.

The South Looks at Its Past was written in collaboration with Kendrick as a historical preface for the regional studies done under the direction of Howard Odum at The University of North Carolina. The book reflects the mature interpretations of these two scholars, rather than original research. The study is divided into two parts and it seems likely that Arnett was responsible for the period since 1875. He developed further several of the basic premises of The Populist Movement in Georgia and also reviewed the social, political, and economic weaknesses of the twentieth-century South, while noting areas of progress. For Arnett, there was a major break between the Old and the New South. However, he almost totally ignored southern thought, religion, mores, and racial attitudes, all areas where other scholars would find significant continuity.

In Claude Kitchin and the Wilson War Policies, Arnett confronted one of the great tragedies of the twentieth century. World War I constituted a formidable challenge to the liberal gospel of progress. The war fought to end all wars, to secure self-determination of peoples, and to make the world safe for democracy did none of these things and brought instead death and destruction on a scale that had once been unimaginable. Arnett, however, wrote not of tragedy and defeat but of the "good" Kitchin and the "evil" Wilson. The book was Arnett's weakest work. His analyses were superficial, and he failed to relate Kitchen either to agrarian reform or to his southern background. The book did, however, reflect an attitude toward U.S. participation in the war that was widely shared at the time it was published. Arnett's own opposition to American entry in the war evidently developed after the fact, since in 1917 he was an instructor in the Student Army Training Corps at Columbia.

In various ways, Arnett served his profession, college, and community. As a member of the American Historical Association, the Southern Historical Association, and the North Carolina Literary and Historical Association, he worked for the advancement of the historical profession at the national, regional, and state levels. He contributed numerous articles and book reviews to scholarly journals. In The Story of North Carolina (1933), he tried to explain the state's history to young readers. Beyond his duties as professor, Arnett served on faculty committees concerned with such diverse interests as the college library, interdepartmental majors, and the campus radio station. He took an active interest in the development of Greensboro's public libraries; from 1932 until his death he was a member of the Greensboro Public Library Board.

Arnett had an artistic bent that perhaps was never fully realized. He enjoyed painting and writing. In collaboration with his wife he wrote a detective story, never published.

Arnett was buried at Double Head's Baptist Church in Screven County, Ga., where his father had been a pastor for over fifty years.

Greensboro Public Library), for obituaries, reviews of Arnett's books, and a guide to materials on Arnett.