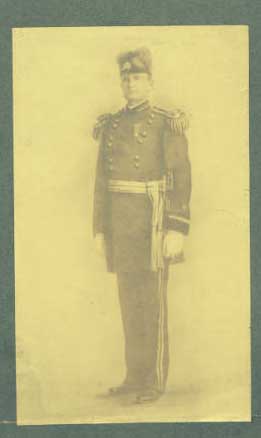 Armfield spent most of his life in Statesville, where his father moved in 1870, and was educated there in the common schools and at the Statesville Male Academy. Primarily, he was a farmer, but he was best known in his military career. When a young man, he enlisted in the Iredell Blues, the local military company that had been reorganized after the Civil War. He rose quickly to the captaincy of the Blues and after about six years in that position was elected colonel of his regiment, then the Fourth Regiment of the North Carolina State Guard.

At the outbreak of the war with Spain in 1898, his regiment volunteered; after being mustered in, in May, it was reorganized as the First North Carolina Regiment, with Armfield as its colonel. As the war progressed, it was stationed at Jacksonville, Fla.; after the surrender of the Spanish forces, it was the only North Carolina regiment to be sent to Cuba. In April 1899 it was brought home and disbanded after about eleven months of service. Much of that time, Armfield was acting brigadier general in the absence of the regular general. At the beginning of the administration of Governor Charles B. Aycock in 1901, he was appointed brigadier general of the North Carolina State Guard. He held that position until he was appointed adjutant general of the guard by Governor W. W. Kitchen in 1909.

Armfield spent the latter part of his life at the old Armfield homestead in Statesville, with a married sister and her husband, Dr. and Mrs. W. J. Hill. He came home in early October of 1910, suffering from Bright's disease, and died soon after. He was buried with full military honors, with most of the state's dignitaries attending, in Oakwood Cemetery in Statesville.