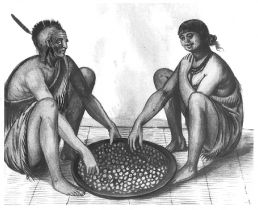 Bear River Indians, an Algonquian tribe also known as the Bay River Indians, lived between the Pamlico and Neuse Rivers in the late seventeenth and early eighteenth centuries. They were neighbors of the Pamlico, and there is some evidence they were related to the Machapunga Indians. Both the Bear River and Pamlico Indians may have been descendants of the Indians that the Raleigh colonists of 1585-86 found living in the area. In 1709 the Bear River Indians occupied a single town, Raudauquaquank, which contained 50 warriors.

The colonists complained of depredations and threats from this tribe, which apparently helped instigate the massacre that began the Tuscarora War (1711-13). During that uprising, colonial leaders enslaved a number of the tribe's women and children, and the Bear River chief was tortured to death by Indian allies of the colonists. At the end of the war, the Tuscarora turned on their former allies, promising in the peace treaty to destroy them, sparing no males more than 14 years old.