See also: Graveyard of the Atlantic 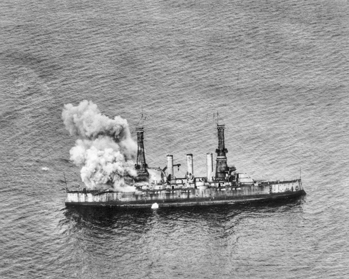 In 1923 two surplus navy battleships were bombed and sunk by aircraft under the command of Brig. Gen. William "Billy" Mitchell off Cape Hatteras to determine the effectiveness of air power against heavy surface ships. Mitchell, an outspoken advocate of air power, had demonstrated in 1921 what many naval strategists considered impossible-that battleships could be destroyed from the air-when he used airplanes to sink an old surplus battleship. Two years later, he set up the experiment off Cape Hatteras to determine if battleships could be sunk by high-level bombing and to measure the potential for aircraft being called into combat from long distances to intercept a hostile warship. The target vessels, which were to be scrapped under postwar naval limitation treaties, were the 14,949-ton New Jersey and Virginia, built between 1902 and 1906 at a cost of $6 million each and anchored 18 miles southeast of Cape Hatteras.

The attacks began on the morning of 5 Sept. 1923. While officers and dignitaries watched from another ship, the first planes flew directly into action from Langley Airfield, Va., a distance of 175 miles, demonstrating the feasibility of long-range attack. The remaining planes under Mitchell flew from a temporary airfield on Hatteras. The New Jersey was shelled with 600-pound bombs from 10,000 feet, which left the ship damaged and leaking. The attack then shifted to the Virginia, which was sunk with thirteen 1,100-pound bombs from 3,000 feet in only 30 minutes. That afternoon the planes returned to send the New Jersey to the bottom in only a few minutes.

The experiment proved both the benefit of high-altitude bombing and aircraft long-range strike capability. However, debate over the use of air power against ships continued until World War II conclusively demonstrated the value of air power.

Emile Gauvreau and Lester Cohen, Billy Mitchell: Founder of Our Air Force and Prophet without Honor (1942).

William Schwarzer, The Lion Killers: Billy Mitchell and the Birth of Strategic Bombing (2003).