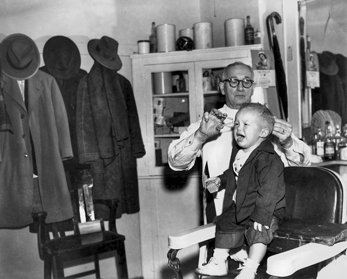 By the time North Carolina was colonized, the French custom of having barbers do surgery was never practiced in the colonies. Striped barber poles were abandoned, only to be revived by the appearance of barber shops as a business following the Civil War. Although haircutting was practiced by specialists in ancient civilizations such as Egypt, it was not regarded as a career in early North Carolina. Among the upper classes, people were hired to cut hair in order to improve a person's appearance. Members of the lower classes generally relied on the help of friends and family, with most men depending on the haircutting skills of their wives or daughters. Shaving was a personal task, the need for which was reduced by many men by growing a beard that could be cut only after it grew long. Straight razors were available, as were stones and leather straps on which they were sharpened. Safety razors, a later invention, did not become popular until the early twentieth century.

Slaveholders frequently used individual slaves as house laborers, drawing on their ability to perform many functions, including haircutting. As the wearing of wigs was never practiced in North Carolina as an aid to attractiveness, talents such as haircutting were in demand. Slaves' success as haircutters sometimes led to their freedom: at the end of the Civil War, there were 25 freed blacks who practiced the profession of barbering. Working at the house of the customer, they practiced the only profession that was open to blacks at that time.

At the start of the twentieth century, shops specializing in haircuts and shaves spread throughout the state. These were generally open to male customers only, while women went to separate establishments called beauty shops or parlors. Barbershops served at times as male sanctuaries, private clubs for male companionship often being unavailable to the majority of men. Social and political as well as tonsorial reasons often were motivations for visits to barbershops.

Specialized barber chairs, lifted by gears and later by hydraulic power, were often installed. Boards were placed across the arms of the chairs for young patrons. Early haircutting was confined to scissor cutting, although clippers appeared at about the same time as barbershops. Early hand-operated clippers caused many barbers to complain of arthritic hands. These early clippers were replaced by the electric versions that have remained almost unchanged from their original appearance. The shops also provided showers, and a bath with hot water was much more desirable than the cold water found in the majority of homes. Perfumed products such as hair tonics and soaps were used, and Bay Rum was the standard aftershave lotion.

After World War II, new types of establishments appeared that had great growth in the latter part of the century. So-called unisex hair dressing shops offered a variety of styles not available in the older barbershops. Haircuts in the latest styles were available at a cost of five to ten times the barbershop rate. The new shops also worked by appointment, which had great appeal for employed people and busy professionals.

Although barbershops of the old style still existed in North Carolina by the early 2000s, their number had declined precipitously. Modern unisex hairstyle businesses, often large chains, could be found in practically every North Carolina mall. As the ambiance of the old barbershops has been replaced by the largely impersonal service of the newer establishments, some social observers have concluded that the freewheeling conversation on which democracy thrives has been markedly diminished.

Michael Kermap, "Short on the Top, Clippers on the Side and Taper the Back," Smithsonian (May 1991).