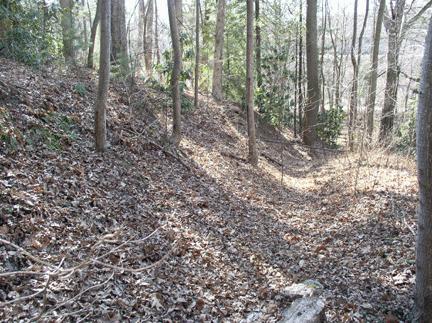 One of the last Civil War actions, the Battle of Asheville was a five-hour standoff between Union and Confederate forces that occurred on the northern outskirts of the city during the afternoon and evening of 6 Apr. 1865. The site of Confederate recruitment camps and a rifle factory, Asheville had once aspired to be the "capital of the Confederacy" because of its geographic centrality. Yet it was spared in Federal raids from East Tennessee until the war's final month. Col. Isaac B. Kirby led 900 Union troops of the 101st Ohio Infantry from Greeneville, Tenn., into North Carolina, moving down the French Broad Valley with orders to "scout in the direction of Asheville, N.C." Along the way, Kirby's men burned bridges, stole horses, confiscated rations, and added Confederate deserters to their ranks. Only as they reached the Sondley and Woodfin farms within four or five miles of Asheville were local residents alerted to their approach.

Confederate colonel John B. Palmer, stationed in the city as an administrator of the state's Western District, was able to muster only 100 to 150 men, some regular troops home on leave and the rest Home Guardsmen. They moved out of the city with two or three cannons in time to encounter Kirby's forces on a field previously fortified with trenches and earthworks beside the French Broad River. Details of the battle remain sketchy, but the trenches and cannon fire seem to have led the Ohioans to assume that they faced a more formidable force than was actually the case. Kirby also received false reports listing 2,000 men and 20 cannons in Asheville, with reinforcements moving in from surrounding areas. Darkness and stormy weather led him to abandon further efforts to take Asheville; instead, he ordered his men to retreat.

The local victory proved short-lived. Two weeks later Maj. Gen. George H. Stoneman's cavalry raid, which moved through western North Carolina and Virginia in March and April, approached Asheville, moving west from Burke and McDowell Counties. Although no official word of Robert E. Lee's surrender at Appomattox had reached either Stoneman or local Confederates, both sides agreed on 24 April that Union forces would march unchallenged through Asheville en route back to Tennessee. But the same Federal troops returned to Asheville a day later, this time pillaging the town, burning the armory, and harassing both male and female residents.

Site of Battle of Asheville. Courtesy of NC Markers, North Carolina  Office of Archives & History. Available from https://www.ncdcr.gov/about/history/division-historical-resources/nc-highway-historical-marker-program/Markers.aspx?MarkerId=PPP-1 (accessed May 16, 2012).

Is there a "birds eye view"

Is there a "birds eye view" of the right and left flanks of Union and Confederate lines for this battle? I'm interested in seeing exactly (or approximately if that's all there is) where each force stood. Thank you.