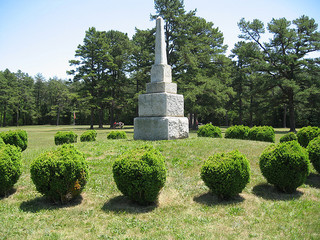 On 16 May 1771 the North Carolina militia, under the command of royal governor William Tryon, defeated backcountry farmers known as the Regulators in a two-hour engagement at a site six miles south of present-day Burlington. The Regulators represented the more violent, radical faction of the growing number of colonists-mainly in the western part of the colony-who were unhappy with the provincial government. Their grievances included high tax rates, dishonest sheriffs, illegal fees, and a scarcity of paper money. Although not the first battle of the American fight for independence, the battle at Alamance contributed to the revolutionary fervor building in the colonies. It also generated a greater westward migration of people into the areas now comprised by the states of Tennessee and Kentucky.

As early as the 1850s, Benson J. Lossing sketched the site of the battle, known as the Alamance Battleground, for his famous pictorial history of the American Revolution. In 1880 citizens of Alamance County erected a granite monument to mark the site. A little more than 50 years later, Alamance Battleground was among the first sites awarded a state highway historical marker. The battleground, now a North Carolina State Historic Site, is located on a 40-acre rural tract on N.C. 62. A visitors center displays maps and museum objects and provides an overview of the battle and its background. A 1780 log house provides a further glimpse at the Regulator movement and life in the backcountry during this period. Flags marking battle positions and the Regulator campsite, monuments, a cannon, and informational plaques are on the battlefield. Demonstrations and special programs are presented at various times at the site.

This helps a lot!

This helps a lot!

This site was very helpful

This site was very helpful for my project, and I recommend it 10/10.