Females are somewhat larger than males. 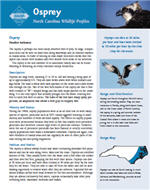 Monogamous. Breeding season early March to May. The incubation period for the 2 to 4 eggs is 4 to 5 weeks.

Called chick or eyas. Remain in nest until 8 weeks of age when they fledge. Young reach sexual maturity in 3 years. 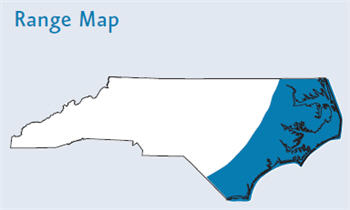 Ospreys are found throughout North America during the breeding season. They are most numerous in Florida, along the Atlantic Coast, and on the Great Lakes. In North Carolina, the osprey is a spring and summer resident of the estuaries, lakes and rivers of the Coastal Plain where it nests and raises its young, but it is also seen near lakes and rivers inland to the mountains.

The osprey is perhaps our most easily observed bird of prey. Its large, conspicuous nests can be seen on dead trees along waterways and on channel markers in coastal areas. Its habit of nesting on man-made structures shows that this raptor can coexist with humans and even benefit from some of our activities.

The osprey is the sole member of its taxonomic family and can be found breeding or wintering on every continent except Antarctica. 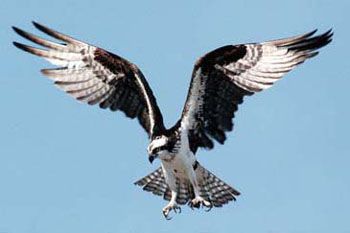 Ospreys are large birds, standing 21 to 24 in. tall and having a wing span  up to approximately 6 ft. They are dark brown above with white stomach and legs below. The head is white with dark speckles on the crown and a dark brown line through the eye. Two of the best field marks of the osprey are that it flies with crooked or “M”—shaped wings and has dark carpal patches on the under wing. It is the only raptor that actually plunges into the water, entering feet first to catch fish with its talons. The soles of the feet have sharp spiny projections, an adaptation that allows a firm grip on slippery fish.

During the 1960s, osprey populations were at an all-time low. As with many

species of raptors, pesticides such as DDT caused eggshell thinning or adult sterility and numbers of birds declined rapidly. The effects on osprey populations were pronounced because they feed on fish that readily store persistent pesticides and therefore contain high levels of pesticide residues. However, since the use of persistent pesticides has been banned or strictly controlled, osprey populations have made a remarkable comeback. Ospreys are again, common residents of coastal areas and can regularly be seen in other parts of the state during fall and spring migrations. 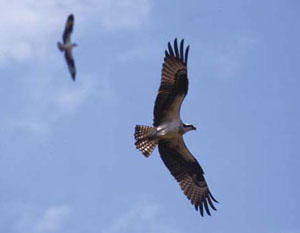 The osprey is almost always found near water containing abundant fish populations and can be seen along rivers, lakes and the coast. Ospreys are excellent hunters of fish. They usually hover over the water until a fish nears the surface and then dive feet first, grasping the fish with their talons. Ospreys can dive at 30 miles per hour and have been clocked at 50 miles per hour by the time they hit the water. They are able to take off from the water and can be seen shaking vigorously to remove water after they are airborne. Captured fish are almost always carried with head forward for the best aerodynamics. Although they are almost exclusively fish eaters, ospreys occasionally take other prey including birds, mammals, mollusks and snakes. 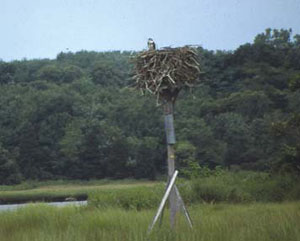 Ospreys build large, bulky nests of sticks in dead trees, on stumps, or on man-made structures such as channel markers. Several pairs may nest in close proximity, indicating that they may prefer to nest in loose colonies. They return to the same nest, usually in early March of each year, and repair and enlarge the nest by adding more sticks.

The female lays 2 to 4 buff-colored eggs with reddish-brown splotches, and

incubation lasts for 4 to 5 weeks. The female does most of the incubation but is relieved by the male when she leaves the nest to feed. The young remain in the nest for about 8 weeks after hatching. After migrating in the fall, the young remain south on the wintering grounds until they are 2 years old. At that time they again migrate north. Ospreys normally start breeding at about 3 years of age. They are usually seen in North Carolina in early March.

Human activities have greatly affected osprey populations in the past through the indiscriminate use of persistent pesticides. After the ban on DDT and similar pesticides, populations rebounded and are healthy at present. Because of their sensitivity to contaminants in the environment and the ease with which they can be observed and monitored, ospreys can serve as an excellent indicator of the health of the environment. They have adapted well to living with man, but continued pollution and destruction of habitat could have an adverse impact in the future.

Ospreys usually mate for life. Thanks to good wildlife management and a ban on DDT in the early 1970s, ospreys have made a significant recovery. But the balance of nature is a sensitive one. We need to do all we can to help this magnificent bird thrive. Here are some ways you can help:

Do you enjoy watching the glorious osprey? Buy a pair of binoculars and find out where the nearest osprey nest is. Watch them fish, too. The osprey is the only raptor in North America to eat fish almost exclusively and there are few things as exciting as watching an osprey plunge-dive from high in the sky into the water to catch its prey. Some call them the “sea hawk” of the water.

To see a video on the osprey, go to http://video.nationalgeographic.com/ and enter osprey in the search bar.