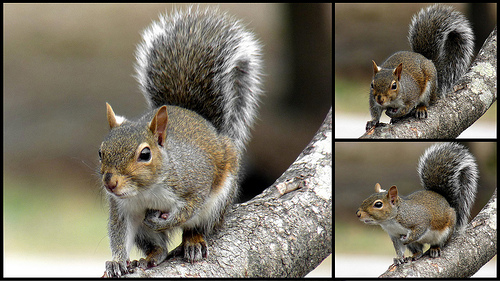 Nuts and acorns (mast) are a staple of the gray squirrel’s diet, but they also feed on seeds, fruits, mushrooms, tree buds, and blooms. They occasionally consume insects, bird eggs, and even young birds. Squirrels bury mast during the fall, which they rely on during winter months.

Gray squirrels may have up to two litters per year. Mating generally occurs between late December and February and again in May through July.

After an approximately 44-day gestation period, young are born in late February through March and again in late June through August. Gray squirrels may produce between one and eight young per litter, but most often have two to four per litter.

Mortality is high in young gray squirrels. A nestling gray squirrel has a 25 percent chance of surviving its first year. Survival increases to 50 percent once they are around one year old. In the fall, about half of the population is composed of young squirrels. A few squirrels may survive for 7 or 8 years in the wild.

Humans are probably the major source of mortality for squirrels, through hunting and vehicle strikes. Birds of prey (i.e., red-tailed hawks, barred owls, etc.) are important predators of gray squirrels, as are bobcats, coyotes, foxes, and black rat snakes. Raccoons and snakes can be significant predators of nestlings.

The eastern gray squirrel ranges from southern Canada throughout the eastern United States westward to the fringes of the Midwestern grasslands. Gray squirrels are found statewide in North Carolina.

The eastern gray squirrel is the most common and frequently observed of North Carolina’s five tree squirrel species. The gray squirrel is found in every county and was adopted as the state mammal in 1969. Gray squirrels are enjoyed by wildlife-watchers and hunters alike, but they can be a nuisance when they cause property damage.

Gray squirrels are diurnal and active year-round. They typically have grayish-brown fur and a whitish belly with a conspicuously bushy tail; however, some individuals can range in color from yellowish-gray to silvery gray depending on the time of year. Though less common, some squirrels may be reddish, black, or white, or some combination of these colors.

The gray squirrel is larger than the red squirrel of Western North Carolina and considerably smaller than the eastern fox squirrel. The gray squirrel is easily distinguished from the nocturnal Carolina northern and southern flying squirrels, which are brownish or brownish gray in coloration, have large eyes, and a loose flap of skin between the front and back legs, which allows them to glide through the air.

Over a century ago, gray squirrels were particularly abundant in the Eastern United States. Historical accounts refer to massive squirrel “migrations” that were thought to have resulted from region-wide food shortages. Although they are not as abundant as in the 19th century, there are still considerable numbers of gray squirrels in stands of old-growth hardwoods and urban and suburban areas, while younger stands of hardwoods and forests dominated by pines sustain populations in lower densities.

For more information on this species, including status and any applicable regulations, visit https://www.ncwildlife.org/Learning/Species/Mammals/Gray-Squirrel.

Gray squirrels are common in rural, suburban, and urban woodlots. Their populations are regulated by availability of suitable habitat and abundance of mast (tree nuts). In a year when acorns and other nuts are plentiful, numerous squirrels will survive the winter and females will produce larger litters. But when food is in short supply, squirrels that survive the winter often produce fewer young.

Gray squirrels inhabit numerous forest types, although they are most abundant in hardwood forests containing a variety of mast-producing trees. Hardwood trees, especially old ones, contain many cavities — either from injury to the tree or excavation by woodpeckers — that provide squirrels with a secure refuge from predators and inclement weather. Gray squirrels also use nests constructed of leaves, though they are not as secure or as well protected from the elements as tree cavities. These nests are used more frequently in warm weather, in areas where tree cavities are scarce, or at times when tree cavities become infested with fleas.

Gray squirrels are very vocal animals that use a variety of calls, including harsh squalls, warning barks, chucks, mews, purrs, and tooth chattering, to communicate with other squirrels. Various postures and tail movements may also be associated with some vocalizations.

Squirrels are considered a small game species in North Carolina. Hunting activities do not endanger squirrel populations; however, large-scale conversion of hardwood forests to other uses may reduce densities of local populations.

Squirrels are often abundant in many urban and suburban areas and are comfortable living near humans. Conflicts can occur when squirrels feed on garden or nut crops, move into occupied dwellings or chew on structures. The most effective way to reduce squirrel damage is by modifying the habitat. Pruning tree branches near homes can prevent squirrels from accessing and entering dwellings. Metal flashing around tree trunks can prevent depredation of fruit and nut trees if the canopies of surrounding trees are not within jumping distance of a squirrel. When habitat modification is impractical, removal of the offending squirrel may be necessary.