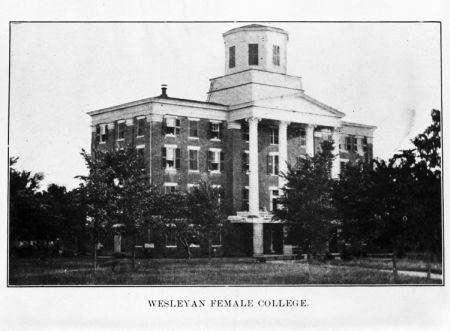 Wesleyan Female College in Murfreesboro was founded and constructed between 1852 and 1855 by the Virginia Conference of the Methodist Episcopal Church to give the "fair daughters [of Virginia and North Carolina] advantages equal to any in the land." The site was chosen because Murfreesboro had an established reputation as a "cultured town." Equally as important to the region's Methodist population was its rivalry with the state's Baptists, who had founded Chowan Female College in Murfreesboro in 1848. As Wesleyan was completed, competition quickly developed between the two schools, with enrollment figures, administrative prosperity, and even the quality of landscaping as points of intense comparison and pride.

Despite able leadership under presidents Joseph Davis, Cornelius Riddick, Paul Whitehead, William Starr, and E. E. Parham, Wesleyan failed to survive. Quarrels between the school's trustees and its presidents limited the effectiveness of the latter's office, and the transfer of the institution in 1881 to the North Carolina Conference of the Methodist Church did not improve Wesleyan's already weak financial base. Perhaps even more devastating was the Civil War, when classes were suspended and school facilities were used as stables and barracks by Confederate cavalry. Wesleyan also suffered a number of fires. One in 1877 forced the closure of the school for four years while it was rebuilt; another in 1893 completely devastated the main building. These and other problems led to the institution's abandonment before 1900.