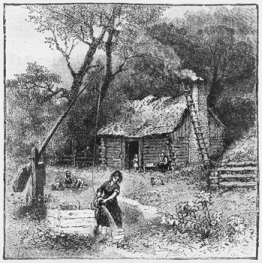 A well sweep was an ingenuous device utilized to draw water from a well without ropes or pulleys. It appeared throughout North Carolina on nineteenth-century farms and plantations; both subsistence farmers and their wealthier neighbors used them. The only materials needed to construct a well sweep were wooden poles, which could be obtained locally. A vertical post was mounted by the well hole. The post held a horizontal pole, or sweep, which was heavier at one end and rested on the ground. A long, thin pole with an attached bucket or pail was placed at the other end. A person would pull the thin pole and bucket down into the well and fill it with water, and the sweep's weight would then lift the bucket up.

The well sweep came to be replaced by pulleys and cranks and eventually by mechanical pumps. Although photographic evidence exists of a few still in use during the early years of the twentieth century, well sweeps were uncommon by midcentury.

John Michael Vlach, Back of the Big House: The Architecture of Plantation Slavery (1993).