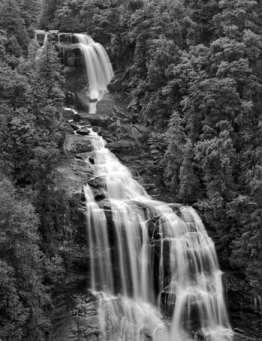 The 75-mile-wide chain of the Blue Ridge Mountains of North Carolina contain some of the most spectacular waterfalls and cascades to be found anywhere in the continental United States. The Blue Ridge Mountains are a very old range, and geologists believe that about 250 million years ago this chain reached heights of over 15,000 feet. Across the vast march of time the jagged cliffs eroded to reveal the beautiful rolling peaks of about 6,000 feet that exist today. In the process, some of the state's most spectacular scenery can be found along its western rivers and streams.

Perhaps North Carolina's most famous waterfall is Linville Falls, located on the Linville River in Burke County. Linville Falls is a dramatic triple fall that consists of an initial drop of 15 feet, after which the flow disappears into a quartzite cliff. There, out of view, it cascades 60 feet before reappearing for a final 45-foot descent into a deep pool. The gorge formed by the river is nearly 1,500 feet high, and the river drops away from the falls another 2,000 feet over the next 12 miles.

Another dramatic waterfall in the Linville area is Elk Falls on the Elk River in Avery County. Although the Elk boasts numerous waterfalls, Elk Falls is the most spectacular. Dropping abruptly 85 feet, the Elk River plunges into a pool of unknown depth. Divers have never reached the bottom, and several legends mention Confederate silver being hidden somewhere in the pool.

Numerous waterfalls may be found in the Nantahala National Forest in Jackson, Macon, and Transylvania Counties. One of the most spectacular is Lower Cullasaja Falls on the Cullasaja River in Macon. With a thundering descent of about 250 feet, this waterfall is one of the highest in the state. Several other dramatic falls can be viewed along the way to Lower Cullasaja Falls. Just beyond the Sequoyah Lake Dam are the Kalakaleskies Falls, a series of cascades ranging from 3 to 45 feet. These falls are fairly accessible, and all may be seen within a quarter of a mile from the parking area below the dam. Another waterfall along the way is Bridal Veil Falls, a series of several drops ranging from 30 to 80 feet. These falls derive their name from a Cherokee legend claiming that if a maiden walked behind the cascading water, she would be married by winter.

In the Pisgah National Forest of Transylvania County near Brevard, another magnificent waterfall can be found on Looking Glass Creek, a tributary of the Davidson River. Looking Glass Falls is a sheer drop of about 60 feet. Because of its easy access (it can be viewed from the parking area), it is one of the most well-known waterfalls in North Carolina. At 411 feet, Whitewater Falls on the Whitewater River near Sapphire is by far the largest waterfall in the state, as well as the highest waterfall east of the Rocky Mountains. The Horsepasture River, also in the Sapphire-Cashiers area, boasts a gradient of over 2,000 feet in six miles, making it home to numerous waterfalls, including Drift Falls (30 feet), Turtleback Falls (20 feet), Rainbow Falls (200 feet), and Stairway Falls (a series of 10- to 12-foot falls).

Kevin Adams, North Carolina Waterfalls: Where to Find Them, How to Photograph Them (1994).