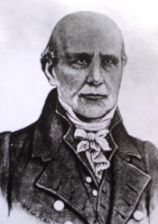 The Warren Junto was the nickname of a group of politicians, led by Nathaniel Macon and all having some connection to Warren County, who were instrumental in the growth of the Jeffersonian Republican Party in North Carolina during early statehood. As President Thomas Jefferson's chief lieutenant in North Carolina, Macon, with his group, contributed greatly to Jefferson's success in the state in the 1800 presidential election. The Raleigh Register, the party's official organ, also played a significant role.