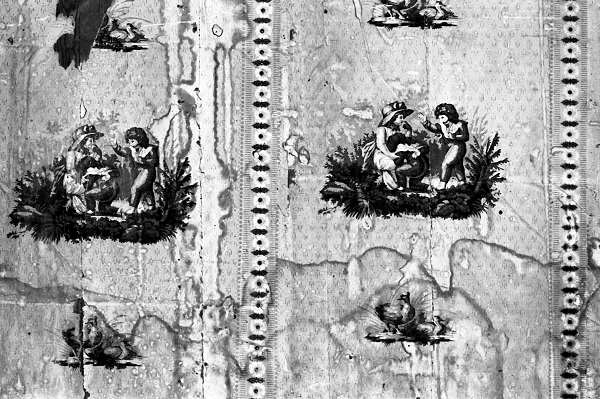 Wallpaper, first known as "wall hanging," appeared in the New England colonies by 1700 and was available in the South by the 1740s. In 1758 plans were made to establish a new capital for North Carolina, to be named George City; the interior of the two-story "Dwelling-House" for the governor was to be plastered and "ornamented with Paper." This may be the earliest reference to wallpaper in North Carolina.

Wallpaper was advertised in the Virginia Gazette in 1766. The Joseph Hewes House in Edenton (ca. 1765) had a soft, gray-blue paper with foliage in deep, natural shades of green with flowers, a temple, and musical instruments in shades of rose, salmon, lavender, and blue. There are other instances of surviving wallpaper in North Carolina. One is found at Rosedale Plantation, built by Archibald Frew near Charlotte in 1815. The plantation has three rooms with paper of two block-printed designs about 21 by 18 inches. One design is of children at play, while the other depicts what appears to be a gravestone inscribed "A la Fidelite." Oak Lawn, also near Charlotte, dates from 1818, but its wallpaper depicting the voyage of Captain Cook was printed in France between 1804 and 1806.

Catherine Lynn, Wallpaper in America from the Seventeenth Century to World War I (1980). 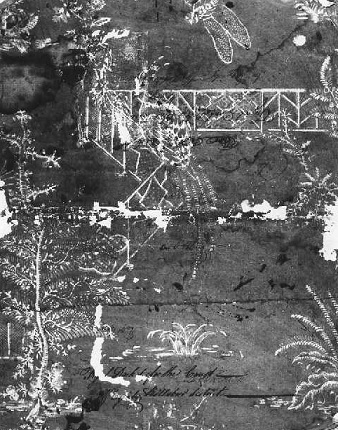 Ackerman, Phyllis. Wallpaper, its History, Design and Use: with frontispiece in colour and numerous illustrations from photographs. London: William Heineman, Ltd. 1923. https://archive.org/stream/wallpaperitshist00ackeuoft#page/n7/mode/2up.

Sanborn, Kate. Old Time Wall Papers: An Account of the Pictorial Papers on our Forefathers' Walls: With a Study of the Historical Development of Wall Paper Making and Decoration.  Greenwich, Conn.: Literary Collector Press. 1905. https://archive.org/stream/oldtimewallpaper00sanb#page/n13/mode/2up.

Rosedale Plantation wallpaper. Call no. N 71 9 284.  From the State Archives of North Carolina.