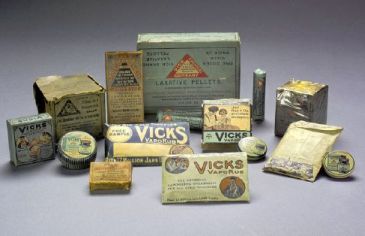 The Vick Chemical Company began as a small cold remedy company in Greensboro and grew into a diversified Fortune 500 corporation with sales in more than 160 countries around the world. In 1905 Lunsford Richardson, a pharmacist and former teacher, started the company (until 1911 called the Vick Family Remedies Company) to manufacture and market the many different medications he had been developing since the 1890s. His eldest daughter served as secretary and his eldest son became the sales manager. Growth came through concentrating on Richardson's most popular product, Vicks VapoRub, a vaporizing salve for colds. Utilizing free samples 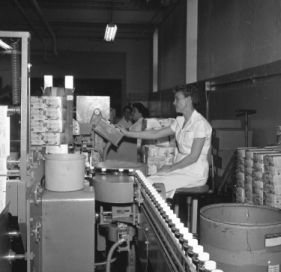 and billboard and newspaper advertising, VapoRub expanded from the Southeast into the Northeast, and by 1917 it had reached the diffused population west of the Mississippi.

After Richardson's death in 1919 his two sons, H. Smith and Lunsford Richardson, and his son-in-law William Y. Preyer oversaw the business's accelerating growth. The company expanded sales to foreign markets, automated production in Greensboro and Philadelphia, listed Vicks stock on the New York Stock Exchange (1925), and moved company headquarters to New York City. Vicks began marketing other cold products such as nose drops and cough drops, and it diversified into prescription drugs, toiletries, and other fields. The company name was changed to Richardson-Merrell in 1960 and to Richardson-Vicks in 1981, when the Merrell pharmaceutical division was sold to Dow Chemical. Sales passed the $1 billion mark in 1979, and by 1983 health care and consumer brands such as Oil of Olay, Clearasil, Pantene, Vidal Sassoon, Fixodent, and Thompson's Water Seal represented more than 75 percent of company sales.

In September 1985 Unilever, one of the world's largest manufacturers of personal care products, sought to acquire Vicks. Seeing no way to head off the takeover after a three-week battle, Vicks turned to a "white knight" and on 7 October sold the company to Procter & Gamble. Vicks VapoRub, past the century mark, continued as one of Procter & Gamble's major products.

"Early examples of Vicks VapoRub in the exhibit Health and Healing Experiences in North Carolina at the N.C. Museum of History." Available from http://www.ncmuseumofhistory.org/collateral/articles/L.Richardson.pdf (accessed July 3, 2012).