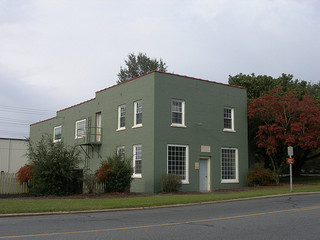 The Tarboro Municipal Milk Plant was established in 1918 in response to a severe outbreak of typhoid fever, dysentery, and colitis that claimed the lives of several Tarboro children and left 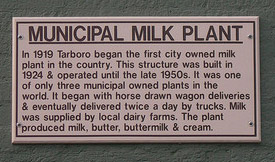 many of all ages weak and ill. That year the town (population 6,400) had obtained its entire milk supply raw and untreated from surrounding farms. There were no large commercial dairies with refrigerated delivery anywhere nearby. Epidemics had been traced to untreated "farm milk" before, but the outbreak in 1918 was severe enough to stir the citizens to drastic action. An ordinance was passed by the town council prohibiting any raw milk to be sold within the town limits. A small pasteurizing plant was set up in a section of the town water plant, and bottles and sterilizing equipment were purchased. A horse-drawn milk wagon and driver were soon delivering safe, pasteurized milk to the townspeople.

As a nonprofit venture, the new "town milk" plant was able to sell its product for a price lower than that charged for raw milk in neighboring communities. There was little or no bootlegging of unprocessed milk, and infant health in the community improved significantly. Soon a new building was erected and motorized distribution replaced the horse-drawn wagon.

At the time it was established, the venture was unique in the nation, and, as far as was known, in the world. Officials from other states and abroad came to Tarboro to investigate the methods and results of the town milk experiment. By 1938 there were similar plants in cities throughout the United States as well as in Wellington, New Zealand, and Rome, Italy.

Tarboro's townspeople were satisfied with their town milk for almost half a century, until wholesale pasteurization and distribution by large companies proved too competitive. In 1965 the plant closed its doors; according to government reports, it was again the only municipal milk plant in operation in the United States at that time.