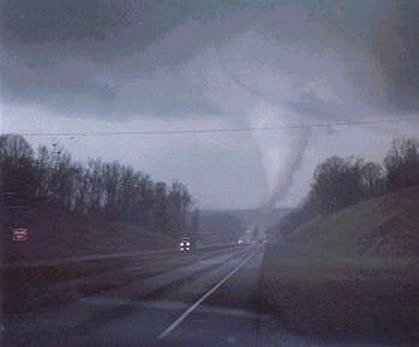 Tornadoes are the fiercest storms that occur on earth. They are cyclonic, with winds that can easily exceed 200 miles per hour for short periods blowing counterclockwise around a low-pressure center. Tornadoes usually develop at the base of a thundercloud and also develop readily during hurricanes. Their wind is sufficient to pick up and incorporate small debris and may move much larger objects, often causing virtually total destruction in their path. North Carolina tornadoes tend to move to the northeast along with their parent thunderstorm, but deviations and jumps are common. The typical tornado track in the state is a few hundred yards wide and a few miles long, although there is often a series of four or five tornadoes associated with a single thunderstorm, widening the path of destruction.

During the period between 1950 and 1995, North Carolina experienced more than 600 tornadoes, ranking it twentysecond among the states in terms of tornado frequency, with a relatively higher number of deaths (82) and injuries (1,952) and amount of property damage ($377 million worth) associated with these storms. There have been marked changes in tornado activity in North Carolina from decade to decade. Whereas during both the 1950s and 1960s the state had fewer than 100 tornadoes, the 1970s had closer to 200 and the 1980s, 150. The 1990s experienced a huge jump in the number of storms, having well over 300-1996 alone had 51 tornadoes, and 1998 broke that record with 66 tornadoes through the end of November-and the early 2000s have thus far had more storms than either the 1950s or the 1960s. Thankfully, a general decrease in tornado-related deaths, a decline attributed to better forecasts and warnings, has accompanied the increase in storms.

The tornado outbreak of 28 Mar. 1984 was arguably the worst in recent North Carolina history. A series of twisters stretched from Newberry, S.C., northeast to Ahoskie, N.C., leaving 44 dead and 800 injured in the state. Other major events, such as the coastal storm of 28 Nov. 1988 and the 5 May 1989 outbreak in the Triangle area, each of which killed four people, further contributed to a decade seemingly full of tornadoes and destruction. Another of North Carolina's worst tornadoes occurred on 27 Mar. 1994, affecting 40 counties and killing two people while causing $20 million in damages. On 20 Mar. 1998 several tornadoes resulted in over $7 million in damages and killed two people in Rockingham County. With Tropical Storm Bonnie passing through the area, a 13 Aug. 2004 tornado injured about 32 people and killed 3.

Most tornadoes occur in the southern portions of the Coastal Plain and Piedmont. The highly populated counties, notably Mecklenburg and Cumberland, commonly record a large number of storms. There are relatively few tornadoes in the Mountains, although one of the severest outbreaks within the last 40 years, on 3-4 Apr. 1974, affected the extreme western counties from Transylvania westward. Six tornadoes were responsible for six deaths and almost $15 million in damage to buildings, crops, and forests.