Part 4: Legal Challenges and the Decline of the Industry 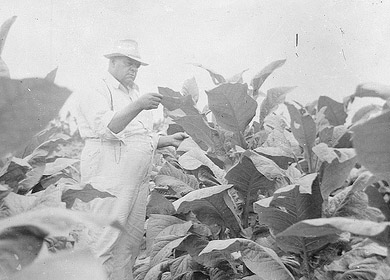 Even as production levels reached an all-time high, the tobacco industry in the United States and North Carolina began its decline in the early 1950s, beginning with health-related magazine articles, congressional hearings on smoking and health in 1957, and the U.S. Surgeon General's Report on Smoking and Health (1964). A wave of civil lawsuits against the tobacco industry between the mid-1970s and 1995 reflected smokers' concerns, with the filing of more than 400 unsuccessful suits. In 1994, however, the first class-action suits were brought against tobacco companies, including a suit by 60 law firms in five states. These suits represented about 40 million smokers and 50 million ex-smokers claiming to be addicts or suffering physical ailments as a result of using tobacco products. The solidarity of the tobacco companies was broken in 1996, when the Liggett Group (the fifth-largest firm) agreed to settle its part of the suit. Liggett agreed to finance an antismoking campaign, not to oppose new government regulations, and to make the first damage payments ever by a tobacco company. Shortly afterward, two former Philip Morris employees confirmed charges that tobacco companies manipulated nicotine levels to keep smokers addicted. Another class-action suit followed, this time involving 60,000 flight attendants who said they were forced to inhale secondary smoke in airplanes.

In the mid-1990s the states of Florida, West Virginia, Minnesota, and Mississippi filed suits for the medical costs they incurred in treating smokers. Other states, including North Carolina, subsequently challenged tobacco companies on similar public health grounds. In November 1998 a legal arrangement between four major U.S. cigarette manufacturers and 46 states, called the Master Settlement Agreement (MSA), was instituted. Under the MSA, cigarette companies agreed to pay the states $206 billion over the following 25 years in compensation for Medicaid costs. These funds, called Phase I funds, represented the largest amount of MSA money to be paid to the states. A second fund in the amount of $5.15 billion, called Phase II, was to be paid by tobacco companies directly to tobacco farmers and allotment holders in the tobacco-growing states. 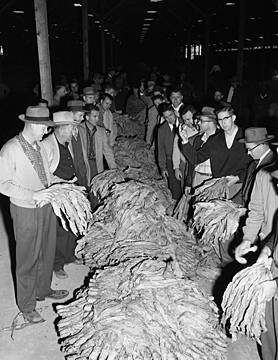 North Carolina's share of Phase I payments equals $4.6 billion over 25 years, and the state's Phase II payments amount to just under $2 billion. In order to distribute Phase I funds equitably, the North Carolina General Assembly created three programs, each with a specific focus. The Golden LEAF Foundation, created in 1999, is a nonprofit corporation that controls the distribution of 50 percent of the Phase I funds. Operating under a board of directors appointed by the governor, the foundation's stated purpose is to improve the economic conditions of distressed North Carolina communities, in particular those that were previously dependent upon tobacco. The Golden LEAF Foundation gives grants to nonprofit and governmental groups and invests in various economic programs designed to improve and diversify the state's economy, especially in areas such as biotechnology, alternative agricultural products, and alternative fuels. Career training and job creation is one of its primary goals.

The Health and Wellness Trust Fund, recipient of 25 percent of North Carolina's Phase I funds, is a state agency that gives grants to programs related to health and medical issues. The other 25 percent of the funds are controlled by the Tobacco Trust Fund Commission, an 18-member board operating under the state treasurer. The commission is organized to give direct assistance to those unemployed as a result of tobacco-related issues. These include tobacco farmers, quota holders, and others working in the tobacco industry whose lives have been adversely affected by the decline of tobacco.

As part of the MSA, "Big Tobacco" companies also agreed to abide by certain marketing limits, such as being barred from marketing to minors. In 2001, however, there were charges that tobacco companies were still targeting teenagers. In March of that year the attorney generals of California and other states sued Reynolds (maker of Winston and Camel cigarettes) for breaching the terms of the agreement. The Federal Trade Commission reported that the Big Five companies had spent a record $8.24 billion on advertising in 2000. While the companies stopped using outdoor billboards, as required, they put their funds into other publicity venues such as retail store displays and print advertising.

As the tobacco industry faltered, demand fell, and tobacco imports grew, the production quota and price support system, in place since 1938, became increasingly ineffective. In 2004 the quota system, so long the underpinning of North Carolina tobacco farming and a key reason for the continued existence of many small tobacco farms, was eliminated through the passing of the federal Fair and Equitable Tobacco Reform Act. The act initiated a massive buyout program funded at $10 billion over ten years to compensate quota holders and tobacco growers in relation to the size of the quotas they owned. Cigarette manufacturers and importers with shares in the U.S. market were to fund the buyout. While the ultimate effects of the buyout are unfolding, industry analysts believe that the end of the quota system and all federal regulation of tobacco production will undoubtedly result in a significant decrease in the number of small tobacco farms in the state.

In 2006 North Carolina remained one of the top tobacco-producing regions in the world, however, with the state's more than 10,000 tobacco farmers selling approximately $620 million worth of the product annually. Economic and societal trends, however, have led to immense growth in the state's output of other agricultural products, notably hogs ($2 billion), broiler chickens ($2 billion), and soybeans ($290 million). In total, these new areas of production have come to redefine North Carolina agriculture and fill the void left by the tobacco industry's decline.

A very information rich website. We are on this at school