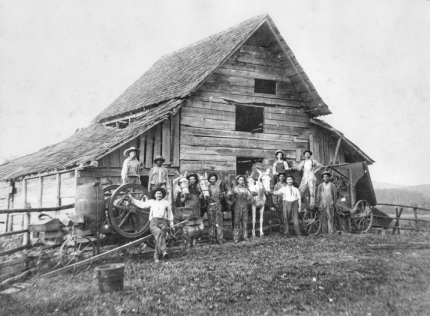 Early stationary threshing machines were often called "groundhog" threshers because when in operation, they appeared to be digging into the ground and kicking refuse out from behind them. Groundhog threshers were comprised of a rotating toothed or studded cylinder, housed within a box, that beat the grain from the heads as sheaves were fed into it. A variation on this design called for a solid ribbed wheel set upright. As the wheel rotated, sheaves of grain were forced against the wheel and the ribs knocked the grain from the heads.

Until the advent of steam engines (and later gas engine tractors), threshing machines were powered by draft animals hitched to "horse powers" that transferred their motion to the machine. Two types of horse powers were used well into the twentieth century: an inclined treadmill and a circular sweep. By the Civil War, stationary combined threshers and separators could thresh, clean, and bag as many as 200 bushels a day. After the Civil War, threshing technology improved rapidly. By the late 1920s the combined thresher-separator had reached its technological zenith. In 1927, a combined harvester, thresher, and separator was invented that allowed the farmer to cut, thresh, and clean in one operation. Until the late 1930s, this "combine," as it was known, was pulled by teams of horses or mules or a by tractor. In the late 1930s, a self-propelled combine was invented that eliminated the need for an external pulling source.

Although North Carolina was never a major national grain producer, much of the culture that became associated with threshing in the West also flourished in the state. Traveling threshers who followed the south-to-north wheat harvest on the Great Plains had their counterparts in North Carolina. And just as in the West, threshing parties emerged from this communal activity, replete with feasts and dances after the work was completed. With the invention of the combine in 1927, however, this once-common rural activity soon passed into memory.