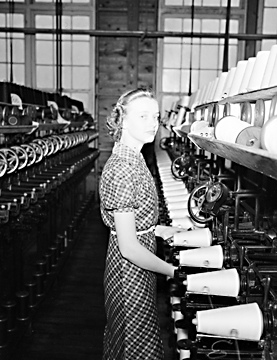 The task system, in which workers were paid not by the hours they worked but by the number and quality of specific tasks they performed, was common in the industrial economy of late nineteenth-century North Carolina. This system was used primarily in traditional industries such as textiles, tobacco, and furniture manufacture. Since management was able to control what it considered an average or above-average output, thereby manipulating the wage scale, the task system kept workers at a tremendous disadvantage. Many employees' reluctance to join unions, which promised to seek better pay and better working conditions, further weakened their position.

The task system was part of an industrial management trend that relied on so-called scientific theories to scrutinize and enhance worker task performance. On the national scene, Frederick W. Taylor, the "father of scientific management," with followers like Henry L. Gantt and Lillian E. Gilbreth, developed a system of manufacturing management that provided coordination and efficiency control of machines, materials, and workers. Gantt, for instance, devised a task-and-bonus system of compensation, a forerunner of later incentive plans. Under this system, workers received a guaranteed wage, but if they accomplished a measurable amount of extra work, they were paid a bonus (a percentage of the base rate). Taylor's doctrine included theories such as time and motion study, production planning, and inventory control. He also claimed that it was possible to determine "scientifically" how a particular human task might be done most efficiently. Labor unions and other pro-labor forces condemned the Taylor system because it diminished or in some cases removed the human qualities involved in job performance.