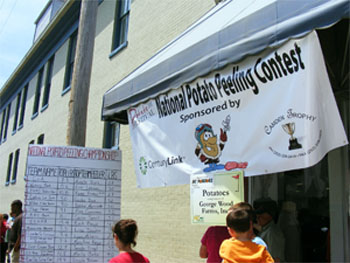 About the North Carolina Potato Festival

The three-day festival includes many notable activities, including the National potato peeling contest, the Little Miss Tater Tot pageant, a 5K run, cornhole and potato sack tournaments, an auto & bike show, boat races, and a United States Coast Guard search & rescue demonstration. Occurring throughout the festival is the street carnival with food, arts & crafts, and ‘spudtacular’ rides. Over 12,000 people attend the festival, which is usually held in mid-May.

The General Assembly of North Carolina enacts:
SECTION 1. Chapter 145 of the General Statutes is amended by adding a new section to read: "§ 145-30. State potato festival. The Albemarle Potato Festival is adopted as the official Irish potato festival of the State of North Carolina."
SECTION 2. This act is effective when it becomes law. In the General Assembly read three times and ratified this the 13th day of May, 2009.