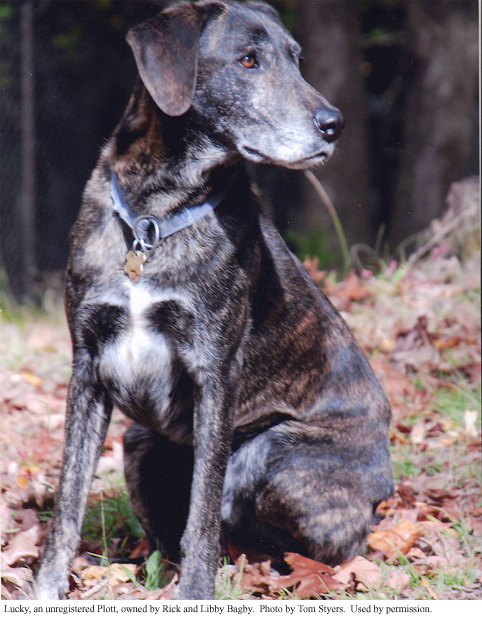 Back in the mid- to late 1800s, people from as far away as Georgia traveled regularly to Haywood County to get puppies from the Plott family. They would arrive with sacks on the backs of their mules or horses to carry home the prized dogs. The Plotts raised hardworking, tenacious, and loyal dogs that would hunt bear and wild boar with boundless courage. The dogs—once black, brown, or brindle—are now usually brindle (which is a mix of black, browns, and tans). They stand twenty to twenty-five inches at the shoulder, weigh about forty-five to fifty-five pounds, and are strong and fast. The Plott hound, as this kind of dog is known today, has a unique high-pitched bark that alerts hunters as it tracks and corners prey. What’s the rest of the story behind North Carolina’s state dog?

The Plott hound is the only officially recognized breed of dog developed in North Carolina. (It is one of only four dog breeds native to the United States.) The foundation stock (or ancestors) for the dogs that became Plott hounds came to America with Johannes Plott in 1750. These five dogs had been a gift from Plott’s father, Elias, a gamekeeper near Heidelberg, Germany. Elias Plott bred canines to be multipurpose workers—they needed to be exceptional big-game hunters, as well as farm and herding dogs. He probably started with the Hanoverian hound in developing his dogs. In the North Carolina Mountains, the Plott family further refined the breed into the tracking and hunting Plott hound that we know today.

Little is known of the first nine years of Johannes Plott’s life in America. After his ship’s record of his travel, he does not appear in public records again until 1759, when he bought land in Bute (now Warren) County. He had changed his name to the Anglicized, or translated to English, name of George Plott. Within a year, Plott moved to Cabarrus County, where he lived until moving to Lincoln County in 1784, raising a family and breeding dogs. His dogs likely had much work to do in the forests and small farms of the Tar Heel backcountry.

George Plott’s son Henry kept improving the Plott hound. He moved to Buncombe (now Haywood) County about 1800. Within a few years the area was known as Plott Valley; the mountain, Plott Balsam; and the waterway, Plott Creek. The region is still home to many Plott descendants. Here the family’s dogs learned to hunt bear in the wilderness, much as their ancestors had hunted in Germany’s Black Forest.

The Plott family did not keep written records about its dogs, but it was skilled in raising them. By the time Montraville Plott was born in 1850, Plott hounds were well established and highly prized in western North Carolina. He continued to improve the breed’s temperament and performance. Word spread about their superior working and hunting talents, courage, and tenacity. Montraville Plott was dedicated to his dogs, passing along that devotion to his children and many friends. Two of his sons, John A. Plott and Henry Vaughn “Von” Plott, along with a few other hunters, captured the interest of hunters nationwide in the 1930s and 1940s with the dogs.

In 1998 the American Kennel Club (AKC) recognized the Plott hound as a distinctive breed. The Plott has been North Carolina’s state dog since 1989, but having been bred for hunting and tracking, it is not often seen walking on a leash around a suburban neighborhood. People who love Plott hounds describe the dogs as gentle with people and loyal to their owners. But if you were walking a Plott hound on a trail, and the dog caught the scent of a wild animal, it likely would want to take off on a hunt. Bold and energetic, Plotts want to work, no doubt about it.

This site stinks and I needa

This site stinks and I needa librarian plz! :D

Hi -- thanks for your post and feedback. NCpedia is always looking for ways to improve the site and content so please let us know if you have any specific suggestions!

Thanks for visiting NCpedia!

I wish I had that dog

I wish I had that dog

this is a super cool dog i

This web. is not stupid!

This web. is not stupid!

Who is responsible for making

Who is responsible for making the Plott hound the state dog? Who introduced the idea?

Thanks for taking the time to post this inquiry about the Plott Hound in NCpedia. The General Assemby passed the session law to make the Plot Hound the official state dog on August 12, 1989. You can see this law here: Session Laws, 1989, c. 773. You may also want to check out our other entry on the Plott Hound from the Encyclopedia of North Carolina. I hope this information helps. Good luck in your research!

Wow! What great information and extremely interesting! Well written, leaving this reader at least, wanting more! I think I'll have to go do a Google search!

One thought that occurs to me, is that if they are so great at picking up a scent and keeping it, it seems as though they would make OUTSTANDING search and rescue dogs! And perhaps great police dogs too!

Thanks for such great info!