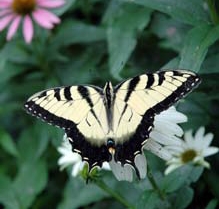 The North Carolina General Assembly designated the Eastern tiger swallowtail (Papilio glaucus) as the official State butterfly of the State of North Carolina. The bill was ratified on June 11, 2012 and approved on June 15, 2012.

Selection as the State Butterfly

The movement to make the Eastern Tiger Swallowtail the official State Butterfly was spearheaded by Frances Parnell of Wilmington. She began her research in the early 2000’s, but decided that due to the then recent destruction from Hurricane Floyd, she would wait to present her proposal. In 2011 she again decided to press forward, enlisting the help of her local Cape Fear Garden Club. The club won the support of numerous other state groups, including the Garden Club of North Carolina and the North Carolina Wildlife Federation, as well as endorsements from several notable state gardens.

The bill was sponsored by Senator Thom Goolsby of New Hanover county, and was backed in the House of Representatives by Rep. Susi Hamilton of New Hanover county. In attempts to sway the legislators, the Cape Fear Garden Club held a reception in Raleigh with food, butterfly pins, and butterfly-shaped cookies. The Senate passed the bill with a vote of 40 to 3.

The Eastern Tiger Swallowtail was selected because it can be found in all 100 counties of North Carolina and is easy to locate and recognize.

About the Eastern Tiger Swallowtail

Eastern Tiger Swallowtails are yellow with black stripes, and have a wingspan of three to six inches. They can be found in many habitats, including woods, fields, near rivers and creeks, or in gardens. The butterfly larvae eat leaves, while adults eat flower nectar.

The female Eastern Tiger Swallowtail will lay single green eggs on leaves, which then hatch into caterpillars. The Caterpillars are brown and white when they are young, but as they grow they turn green with orange and black false eyespots. These spots fool predators into thinking the caterpillar is much larger than it truly is.

The Eastern tiger swallowtail is native to North America and is generally considered the first North American butterfly to have been drawn. The first drawing of it was by John White. White was an artist, cartographer, and is also known as the governor of the Roanoke Island colony that came to be known as the "Lost Colony." 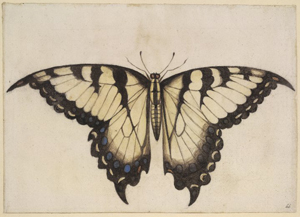