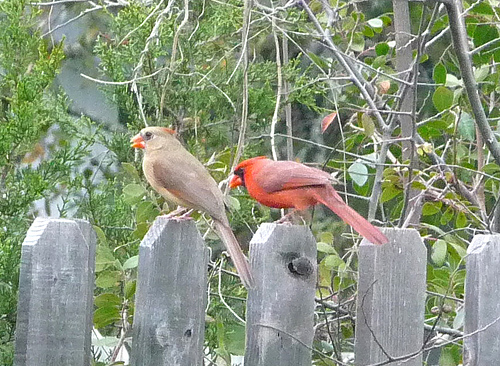 Selection as the State Bird

The choice of the cardinal was by no means certain at the beginning of the session.  The North Carolina Bird Club initiated the campaign to choose a bird as a state symbol, publicizing the campaign through newspapers, local birding and wildlife clubs, and schools.  More than 23,000 votes were cast, and twenty-six different avian candidates were suggested, including, among others, the red-winged blackbird, the wild turkey, the scarlet tanager, and the catbird.  The cardinal received a plurality of 5000 votes, with the dove coming in second with 3395.

Ten years earlier, the state had a different state bird, but only for a few days.  At the suggestion of the North Carolina Federation of Women’s Clubs, the 1933 General Assembly passed Resolution 51, which designated the Carolina Chickadee as the official State Bird.  However, a week later, the Assembly repealed the Resolution with Session Law 1933-521.  The Chickadee’s nickname--the Tomtit--was considered too undignified, and legislators balked at the idea that North Carolina might become known as the "Tomtit State."

The Cardinal’s natural habitat currently extends over half of the United States, as far south as Belize and Guatemala, north into Canada, and as far west as North Dakota and southern Arizona.  The male has year-round bright red plumage and a black face mask, while the female comes in various shades of brown, gray and red.  Both males and females have strong short bills and a distinctive crest of head feathers.  Primarily seed-eaters, cardinals will also eat insects, larvae, sap, and many types of fruit.  Unlike most other bird species, in which only the male vocalizes, both cardinal genders sing--the males typically to attract mates or ward off intruders, and the female to signal the male to bring food for the nestlings.

Cardinals, sometimes known as Redbirds or Northern Cardinals, are non-migratory, and have adapted easily to both city and suburban environments.  In fact, both their numbers and their habitat range have grown as population pressures on other species, and the number of backyard birdfeeders, have increased. Their nests are generally concealed in hedgerows or vines, and monogamous couples can have up to 3 clutches of  2-5 eggs per year during the spring and summer.

Six other states (Illinois, Indiana, Kentucky, Ohio, Virginia, and West Virginia) have chosen the Cardinal as their state bird.

AN ACT FOR THE ADOPTION OF A STATE BIRD.

WHEREAS, North Carolina and Connecticut are the only states in the Union that have not adopted an official state bird; and

WHEREAS, there is a wide-spread movement now on foot among the Bird Clubs, Garden Clubs, and many of the schools of the State, together with a large number of individuals, looking to the adoption of a state bird by the present Legislature, to which end the North Carolina Bird Club has, so far as it has been in its power, canvassed the State for votes on the selection of a suitable representative bird to be officially adopted; and

WHEREAS, the Cardinal has received a decidedly larger number of votes  than any other species:   Now, therefore:

Section 1. That the Cardinal shall be, and hereby is declared to be the official State Bird of North Carolina.

Sec. 3. This Act shall be in full force and effect from and after its ratification.
Ratified this the 8th day of March, 1943.

To learn more about the Cardinal, its habitat and habits, visit these resources:

"Northern Cardinal." 2009. All about birds. Cornell Lab of Ornithology. Accessed 2/2011. Online at https://www.allaboutbirds.org/guide/Northern_Cardinal/id.

so boring I fell asleep on

so boring I fell asleep on this ima rate this a half of 1-star prekmet stop posting as different people.

this is very helpful for my

this is very helpful for my project

carnels are red and they

I think that NCPedia is the

I think that NCPedia is the most helpful website for my class project.

So glad NCpedia could help

So glad NCpedia could help you and thank you for letting us know!

I think this is very

I think this is very important.

thats rude i think this is

thats rude i think this is very helpful i did not

know that there was a brown cardinal that was the female

hello i'm the pro of the