By Steven A. Hill, 2017. Published with permission. For personal educational use and not for further distribution.

Herman Bryan Sugg was born on September 15, 1885 in North Carolina. Following military service during World War One, Sugg became Principal of Colored Schools in Farmville, North Carolina, from November 1918 to 1959. In 1965, he was the first African American to be elected to Farmville’s School Board. The school H.B. Sugg led was named for him during the 1953-1954 school-year.

H.B. Sugg’s parents, Bryant Sugg and Penny Briggs Sugg, were both born enslaved. Bryant Sugg told of his life as a slave and how he had fled his master’s plantation in Greene County to connect with Union General Sherman’s Army as it marched through North Carolina in 1865. Following the Civil War, Bryant and Penny worked as tenant farmers near Snow Hill, North Carolina, and reared a family of seven boys and six girls. 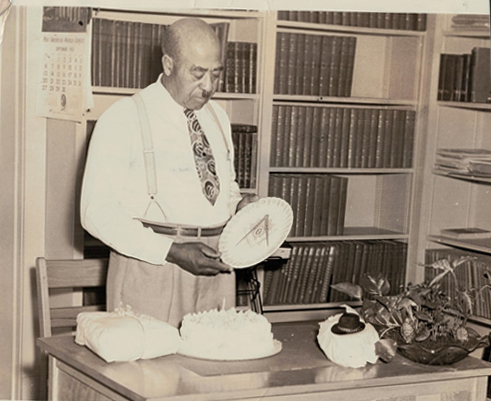 During H.B. Sugg’s youth, he doggedly pursued learning: “My parents always allowed me to go [to school], provided I’d do my share of the work.  . . . I’ve picked cotton many a time by moonlight so I’d be free to go to school the next day.”  Sugg said that “by the time I got grown, I was considered ‘educated’ enough to be a teacher.” His first job was at a one room school in Greene County, close to Farmville. Despite having obtained a job as a teacher, Sugg knew that he needed more education. He lived at home until he was twenty one and helped his parents with farm work while also teaching. Starting at age twenty one, Sugg worked at C.D. Saul’s Store in Snow Hill and saved money for college tuition. In his mid-twenties, he attended the Mary Potter School in Oxford, North Carolina for four years and lived in the dormitory. He worked on campus during the school year and labored in Durham’s tobacco factory during the summer.

After graduating from the Mary Potter School, Sugg enrolled at Lincoln University in Pennsylvania where he earned his Bachelor of Science teaching degree in four years. In an age before student loans, Sugg worked on nearby farms milking cows, feeding livestock, and chopping wood to pay tuition and meet living expenses. During these summers, he worked as a waiter on a passenger steamship that sailed between New York and Massachusetts.

After he received his teaching degree, Sugg worked as a teacher in Lillington, North Carolina for six years before moving to Farmville in 1918. It was in Farmville that “Professor,” or “Fess Sugg”  was revered for being a faithful educational and community leader of the town's black community.

Where untouched forest once stood in 1918, by 1955 H.B. Sugg’s African American school campus occupied the site and included a modern classroom building, a vocational education building for boys, a home economics building for girls, and a band room and gym. According to a 1955 article in the Norfolk Journal and Guide, Farmville residents reminisced that in the first years of Sugg’s leadership, the “sounds of boys and men axing away at trees and undergrowth could be heard from the forest” during the early morning hours before school. Mr. Sugg and his “boys,” many of them now middle aged men and leaders in the local and other communities, cleared the land and prepared a place for what the then young instructor envisioned as the site for the school.”

In 1941, the Farmville Enterprise newspaper highlighted Sugg’s effectiveness when the State Department of Education reported that the “Farmville Negro School” was rated among the best in the state and had “often been commended by leading educators and citizens, of both races, for the efficiency of its organization and administration.”  And by the 1957-1958 school-year, H.B. Sugg’s school was the largest single school unit in Pitt County with over 1,000 students enrolled in twelve grades.

H.B. Sugg played an important role in Farmville during the Jim Crow Era, when white and black communities were separated by law. Funding for “colored schools” came from the white community. Interaction between black and white was conducted via white leaders and black leaders. As head of colored schools, Sugg served as a racial diplomat and the de facto “white-appointed ‘leader’ of his race.”  In this capacity, Sugg led his community in many bi-racial efforts that ranged from anti-Tuberculosis campaigns, assistance to the Red Cross, and a community-wide  “war on rats.” In addition to leadership in the school system, Sugg also served as a member of philanthropic organizations that advanced Farmville’s progress: the Masons, The Colored Elk Lodge, and the Macedonia Church.

The racially divided power structure placed leaders like Sugg in a delicate position. Sugg’s actions as a leader speak to his adroit navigation of potentially dangerous realities to achieve tangible progress for African Americans while not compromising or losing the support of neither the white nor black communities. When the African American schools needed better facilities in 1918, Sugg organized his students to help him construct their own school buildings. White support came later, but in the form of second-hand materials when the school for whites was dismantled and reconstructed for blacks. In the 1930s, Farmville’s community publicly celebrated the colored school for having achieved state accreditation, while at the same time it acknowledged that the school was inadequate. Later, during the Great Depression, funding came from outside of North Carolina to assist Sugg in the form of New Deal funds that built a six-room addition on Farmville’s Colored school. When school buses were unavailable for black students to attend the only colored high school in the county, Sugg organized an effort among blacks to buy their own buses for their children. Sugg noted that “It wasn’t too long till we added another bus, and before too much longer, the county took over providing buses.”  In the 1940s, black students in the H.B. Sugg Marching Band had to buy their own instruments and uniforms until the county provided them years later.

Despite being underfunded, Sugg was certain to publicly express gratitude in the Farmville Enterprise in 1938: “Every colored citizen should feel grateful for what is being done for the race and do all in their power to see to it that the authorities shall not be disappointed in their hope and expectations.”  Sugg’s philosophy of education was rooted in his religious belief as well as in the ideals of Booker T. Washington. H.B. Sugg maintained “that the primary duty of the public school was to prepare and give back to the state a more alert, thrifty and law-abiding citizenship, where 'mastery of the three R's' " was as necessary as instruction that had a "Christian emphasis." Throughout his career, Sugg tirelessly advanced African American educational progress and was honored in Farmville for being a “potent factor in the harmonious relations between the two races in this community.”

H.B Sugg married Aurelia Jones of Roper, North Carolina, and the couple had two children: Vera and Eulalia. Eulalia died before she was two years of age; Vera, like her parents, was a lifelong educator in Los Angeles, California, public schools. H.B. Sugg’s wife, Aureila, died in 1956. H.B. Sugg died on December 27, 1980 and was buried in the cemetery of Saint Peter Church in Snow Hill, North Carolina.

Mrs. Joe Phillips, “A Brief Synopsis of the Origin and Development of H.B. Sugg School” and “School Head for 41 Years, Sugg Retires” undated newspaper clipping from the collection of Dominque Baker.

Blount, Hazel. “Looking Back on Farmville: the Last 100 Years” undated newspaper clipping from the personal collection of Dominque Baker.