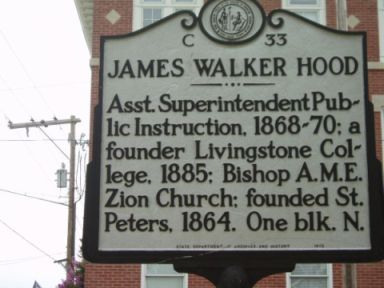 St. Peter AME Zion Church, a brick Gothic Revival church in New Bern, traces its origins to St. Andrew's Chapel, built in 1802. In 1863 James W. Hood, an African Methodist Episcopal Zion (AME Zion) missionary-later a bishop and, from 1868 to 1871, the assistant North Carolina state superintendent of public instruction, with the major responsibility of founding and supervising schools for blacks-came to New Bern and Beaufort, both of which were under Union control and had a considerable population of African American Methodists. Under his leadership, St. Andrew's Chapel and Purvis Chapel in Beaufort affiliated in 1864 with the AME Zion Church, which initially had been formed in 1796 and chartered five years later by a group of blacks who withdrew from the biracial John Street Methodist Church in New York City. St. Andrew's Chapel was the first church in the state and in the South to join the AME Zion Church. In 1879 the congregation changed its name to St. Peter and built a new frame church. After the church burned in 1922, it was rebuilt in stages from 1923 until 1940.