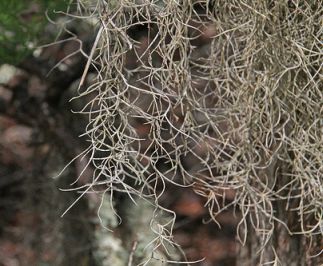 Spanish moss (Tillandsia usneoides) is not actually a moss but rather a member of the pineapple family. Deriving its nutrients from the air, Spanish moss is not parasitic and usually favors hardwood trees. This fibrous plant bears tiny yellow flowers and is found in the eastern regions of North Carolina, generally in low woods and maritime forests. The gray-green tendrils drape gracefully from branches and can extend up to 20 feet. Spanish moss was made into clothing by Native Americans, and a wad of it served as a diaper for infants. Streamers of it were twisted into rope during the Civil War. Gathered in quantity, it was buried in sandy soil until the growing part rotted, leaving the tough inner strands, which were used to stuff mattresses, cushions, or upholstered furniture. An enduring symbol of the South and southern culture, Spanish moss is often found lending an air of mystique to novels and poetry.