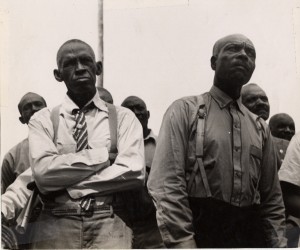 The Southern Tenant Farmers' Union (STFU) was created in response to both the deepening economic depression and the reduction in cotton acreage mandated by the New Deal's 1933 Agricultural Adjustment Act. Primarily a phenomenon of the upper Mississippi Delta's cotton plantation culture, the union was founded by a racially integrated group of sharecroppers and small businessmen in Arkansas in 1934. Its leaders included H. L. Mitchell and Clay East, both dedicated socialists and natives of the Delta. Violence against STFU organizational efforts in 1935 produced national publicity that, in turn, generated much-needed financial aid.

The STFU's impact on North Carolina was indirect and diffuse. To be sure, legislation in the late 1930s helped tenant farmers in the east, but the STFU never crossed the mountains in its organizational drives. The STFU papers are housed in the Southern Historical Collection at the University of North Carolina at Chapel Hill.

Donald H. Grubbs, Cry from the Cotton: The Southern Tenant Farmers' Union and the New Deal (1971).