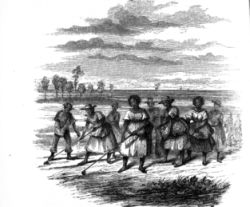 The Slaves' Midsummer Holiday, when slave laborers were permitted a few days off, occurred after crops were laid by and before harvesting began. On 28 Aug. 1862 Catherine Ann Devereux Edmondston of Halifax County wrote in her diary that it was "the Negroes Midsummer holiday, and as all of them but Fanny & Dolly have gone down to the Plantation dinner, the premises are deserted." She referred to "the annual three days holiday" as if it occurred regularly. In sections of the South with large slave populations, summer was a likely time for a slave insurrection and one that whites often dreaded for that reason. The Nat Turner Rebellion at Southampton County, Va., occurred on 21 Aug. 1831.