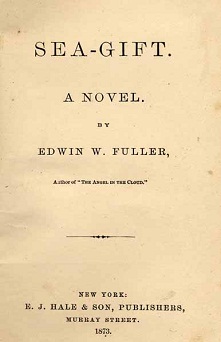 Sea-Gift, an 1873 novel by Edwin Wiley Fuller (1848-76) of Louisburg, presented a lively and romantic picture of student life in Chapel Hill. Autobiographical in some respects, it describes the youth of one John Smith, his career at the University of North Carolina, and his participation in the Civil War. The book contains detailed descriptions of the hazing of freshmen and other aspects of student life and was the first novel set in part in Chapel Hill. It contains a tall tale-telling contest, including a definition of the tall tale presented over 30 years before Mark Twain's essay on the same subject. The plot incorporates the university's "Dromgoole myth," concerning a famous duel fought near Piney Prospect in Chapel Hill. The book came to be known as the "Freshman's Bible" in the late nineteenth century and probably had a bearing on the formation of the Order of the Gimghoul at the university and the construction there of Gimghoul Castle. Elements of the plot of Sea-Gift involving a long train ride to enter college also may have influenced Thomas Wolfe in the writing of his novel, Look Homeward, Angel (1929), and a scene involving the burning of a plantation house is thought to have been a model for Margaret Mitchell in the writing of Gone with the Wind (1936).