By Research Branch, North Carolina Office of Archives and History, 2006 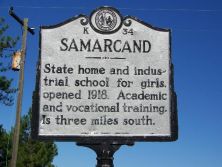 Samarcand, the State Home and Industrial School for Girls, was established in 1918 as a correctional institute for young women. The concept of the school originated through the work of Presbyterian minister A. A. McGeachy, who believed the state needed a protective care center for delinquent juvenile girls, many of whom were vagrants and prostitutes.

Named for a Persian city conquered by Alexander the Great, Samarcand was located on 230 acres that had been the Marienfield Open Air School for Boys. The school officially opened on September 17, 1918, and operated as a female counterpart to the Stonewall Jackson Training School in Concord. Dr. McGeachy was elected first president of the board of trustees and subsequently appointed schoolteacher Agnes B. MacNaughton as first superintendent.

By 1919, Samarcand housed more than 200 females between the ages of ten and twenty-five. The school curriculum consisted of Biblical studies, music, science, and math. In addition, the girls received training in weaving, canning, and laundry preparation, as well as working on the chicken and cattle farm adjacent to the facility. In 1930, the administration opened an accredited high school on the campus, as well as a hospital.

Discipline at Samarcand could be harsh. Corporal punishment, in addition to solitary confinement, was often administered to the young women who misbehaved. In 1931, sixteen inmates set fire to two of the dormitories. They were charged with arson, and twelve of them set fire to their cells in prison. Eight eventually saw prison time. A 1940 account of the disciplinary ward described mattresses on the floor with no beds and a single washbasin and toilet for nearly thirty girls.

Samarcand survived the Great Depression and the loss of many male staff during World War II. The state officially renamed the school Samarcand Manor in 1974 and transferred it from the Department of Corrections to the Department of Human Services. Samarcand remained a rehabilitation center for delinquent children and began admitting male patients as well. In 2002, state officials decided to return Samarcand to an all female institution. Samarcand closed in 2011.

During an ancestry search

During an ancestry search through census records I found that my mother had been at the Industrial School. Have not had luck in a google search to find records. Why would a 13 year old be sentenced to this type of school and is there any way to look at the records.

Any records would be located at the State Archives of North Carolina, but access is likely restricted. You can contact  the Archives at https://archives.ncdcr.gov/researchers/services/ordering-copies

I was at Samarcand Manor for

I was at Samarcand Manor for 2 1/2 years and it was a great experience for me. My home life was incessant and beatings everyday or so, my mom knew it and didn’t stop it and chose his side against me and her husband, Samarcand was a Hope for me and I learned how to do so many things that I wouldn’t have if stayed at home, I was Blessed to go there, I worked in the hair salon there and I m a Hair Stylist today because of Samarcand , owner and operator of my Salon ,

I was sent there twice. I

I was sent there twice. I spent at least birthdays there. Once I went in with Hepititus. I was skipping school and following girls. We were hitchhiking up and down the east coast. 1968 69 70. I have great memorys from that time. Went to school half a day ,worked a half day. I did all of the jobs..Farm,laundry,cook,weaving,etc. I was put in solitary 15 times. Once I sat down and refused to shine.Well then everybody sat down. Locked up for starting a riot. Boy was Ms Mitchell fit to be tied.When I got out of solitary I saw She had chopped off girls hair. For real. Because SHE locked me up first I didn't get mine cut. I ran from there too. Got brought back of coarse all scratched up.We had nicknames made by thefirst letters of your name. Mine was Water Melon. I was in Gardner Hall mostly. Those porches on the end of halls. Froze to death sleeping out there. I had great time and alot of good memories. Learned junior and senior lifesaving at pool. Sitting behind the plow ,planting. Changing chickens in chicken houses. Lol. Yes alot of good girls and good memories.

Just found out that my

Just found out that my grandmother was sent here when she was 15 or 16. In 1948 or 1949 for about 8 months according to her last surviving sister. We are trying to find out more information on why she was send here. If someone could please reach out to me I would appreciate it.

Were you able to find any

Were you able to find any records? My mother was at Samarcand in 1940 and I too am trying to find anything about her stay there,

Unfortunately, the records for Samarcand and other institutions are sealed. They are located at the State Archives of North Carolina and informatioon about the school is not sealed, but records on students there is sealed. It may be best to research to research court records for the area where she lived for clues as to why she was sent there.

I was there in the 70s when

I was there in the 70s when everything changed . We got a new director and we moved from the old upper buildings closer to the pool and school. The upper buildings were more like a POW would be. We were then allowed to get off campus jobs etc.

I remember being in a cottage

I remember being in a cottage that was beside a small pond with so many fish that the poor things were hungry for any food thrown in the water and dozens would come to the surface. The sound of the frogs, crickets, large bugs and other around came though your window at night and you could not sleep it was so loud. The doctor we were taken to for when sick was a nasty man who was clever enough not to get caught but would touch you without gloves while you were not coved and totally naked and do other stuff. But not much you could do about that back then. We worked in the laundry until you were ready to pass out from the heat and then you were sent back were you could get water. We got milk I think in the old milk cans maybe from one of the surrounding farms. That was kind of cool some how. It would turn into cream over night. There was a strawberry farm in back I remember walking around once. They put me in one of the older buildings later and on my floor there were 4 girls that the ladies who worked there were afraid of and let them have their way. I remember having to wash dishes because these loud mouths refused and they yelled at the lady in charge and at me from time to time. I was a quiet shy person but I had had enough and kept one on the knives handy by the sink just in case they jumped me or the lady watching us. She was not a bad person, just as scared as I was but even though shy and quiet, I hated bullies and still do and a shy person can leave you with a funny look on your face if pushed too much. Did not want to hurt anyone and glad It never came to it, but just in case, a kitchen knife comes in handy. The land around the place was very nice and I love trees and the woods so very much still even today and the new cottages were a nice place to live. The girls stole my stuff from me and nothing was done but that was life there. At lest I think we were safe from the men who worked around the place. At lest as far as I knew. Most of the women working there were not too bad to us. And to say the old buildings were like POW camps is so right. Nice to talk about the old place. Are there any pictures at all?

I was at Samarcand Manor from

I was at Samarcand Manor from March 1963 until June 1967. I graduated from high school while there. I would love to read my records and talk to other girls that where there during these years.