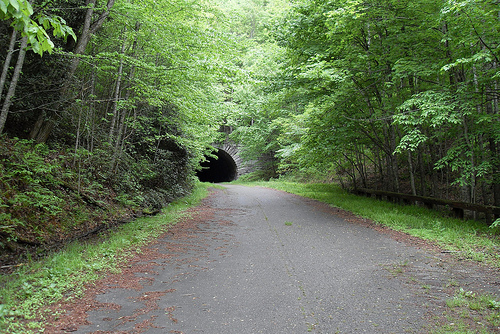 The "Road to Nowhere" is the droll nickname of an unfinished six-mile stretch of highway that is the result of an unfulfilled promise by the U.S. government to a small community in Swain County. The genesis of the road began in the 1930s and 1940s, when the federal government and the Tennessee Valley Authority took over 67,800 acres of public and private land in Graham and Swain Counties to build Fontana Dam, creating Fontana Lake and part of the Great Smoky Mountains National Park. In compensation for the land, which had been owned by many families for generations, the government promised to reimburse Swain County for the loss of flooded Highway 288, which had provided access to the area. Another assurance was the construction of a road approximately 30 miles long that would follow the northern shore of the lake and help substitute for the highway and allow the displaced residents access to their family cemeteries.

Begun in the 1940s, this road, called Lakeview Drive, extended about six miles by 1969 but was stalled by environmental issues. Although Congressman Charles Taylor and Senator Jesse Helms obtained $16 million in federal funding for the North Shore Road Project in October 2000, the road was never completed, partly because of the projected costs of construction. It remains a sensitive issue for area residents, who continue to view the "Road to Nowhere" as a broken promise.

Despite the difficult social and political issues surrounding the road, it offers some of the least-crowded views of Great Smoky Mountains National Park. Beginning about three miles outside of Bryson City, the drive provides views of Fontana Lake and the Tuckasegee River as well as encounters with woodlands and many small streams. Several hiking trails, like the approximately 44-mile Lakeshore Trail, lead from the road to some of the highlights of the park, including its highest peak, Clingman's Dome, reached by Noland Creek Trail.

My father, Odell Shuler, was

My father, Odell Shuler, was Chairman of the Swain County Board of Commissioners during the 1960's until the mid 1970's. He worked many hours and attended normous meetings in regard to the "Road to Nowhere". Which in a 1943 agreement between the Department of Interior and the Tennessee Valley Authority and Swain County. He was even willing to go to jail than give in to the Department of Interior. He attended conferences in Raleigh with governor Dan K Moore. I'm working a history off my father and would like any information that you could provide. In advance Thank You.

Could you email me some

Could you email me some environmental issues? I am doing a science essay about the sulfuric acid that is produced and how it affects the streams/rivers. Thank you!

Thank you for using NCpedia.

Thank you for using NCpedia. I just sent you an email. If you still need information about this topic, please give me a little more information. Please tell me a bit more about your assignment, and what school it is for. Do you have access to a public library, to a school library, or to both? I sense there will be articles and other materials in the libraries that could help you. A librarian there may be able to help, or I could recommend some sources for you to check.

Good luck with your essay!

hey Laura, i would like to interview you for my history project, if you dont mind please email me

This article was taken from the Encyclopedia of North Carolina, published by the UNC Press in 2006. Try contacting the author through UNC Press. UNC Press's contact information is here: