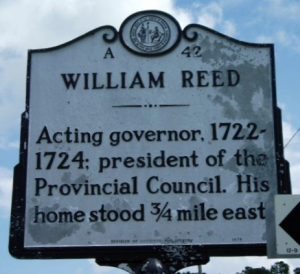 William Reed (ca. 1670-1728) began serving as a Proprietor’s deputy and member of the Council in 1712, and from October 7, 1722 until his death was President of the Council. As president, he served in the capacity of acting governor from the time of his selection until George Burrington’s arrival in January 1724. Little is known about Reed’s early life or, in fact, his personal life in general, since there were several William Reeds in the colony at the time and it is difficult to distinguish them in extant records. Reed was married twice; the first wife was named Christian and the second, Jane. With his wife Christian, he had two sons, Christian and Joseph, and with Jane he had William.

It has been presumed that the William Reed who appears as a witness in Currituck Precinct court in 1692 and as a juror in 1697 was the future acting governor. It is likely the same William Reed who was chosen as a vestryman for the Church of England in the Currituck Precinct in 1715. Governor Charles Eden appointed Reed and two other men to the Virginia-North Carolina Boundary Line Commission on October 30, 1718. While this group began their survey the following year, the dispute over the line was not settled until 1729, after Reed’s death.

William Reed’s tenure as acting governor was relatively uneventful. He seems to have fulfilled the duties of his office, as well as participated in some land speculation. There was a complaint in a 1726 report of the Committee of Grievances, Pasquotank Precinct, claiming that in 1724 Reed levied and collected an unfair tax and assumed the power to appoint commissioners and assessors. When Burrington took the oath of office in 1724, Reed continued as President of the Council.

As President, Reed did not get along with either of the proprietary governors with whom he served. He also had grievances with several of the councillors. While not, to judge from surviving records, overly combative, Reed did not tolerate disrespect from the council, demanding on one occasion to be referred to as President Reed instead of Mr. Reed. Despite quarrels William Reed served as President of the Council until his death in 1728. There is even a letter to the king in which he and the council complain about the state of North Carolina’s government at the hands of Sir Richard Everard that was dated and sent the day after his death. He was contentious until the end. Reed died at his home in Pasquotank County on December 11, 1728.