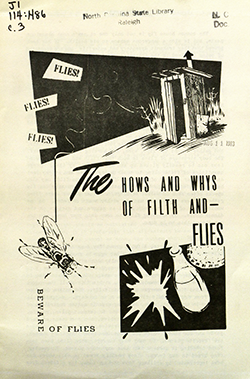 The Executive Organization Act, passed by the General Assembly in 1971, restructured the North Carolina state government into large departments that included agencies with a related focus. In 1997 the health branch of state government, the Division of Public Health, was placed within the newly named DHHS. Led by the state health director, the Division of Public Health maintains a number of programs and services affecting public health policies in the state.

In the last 30 or more years, public health professionals concentrated on providing education, analyzing vital statistics, and reacting to various health emergencies, such as influenza outbreaks in winter. Immunization of children against diseases also became a major focus. Tuberculosis, though curable, has remained a rare but serious health concern.

A myriad of studies and statistics offer insights into the status of public health in North Carolina in the early 2000s. The state has received praise for its "healthy habits" and "healthy environment." In 2004 a national child health "report card" gave North Carolina high-to-acceptable marks in reducing infant and child mortality and teenage pregnancy, providing necessary immunization, and ensuring adequacy of medical insurance across groups, but the state earned exceedingly low marks in child abuse and neglect, obesity among low-income children, asthma, and the use of alcohol, tobacco, and illegal drugs. In addressing these problems, a task force was appointed to reach future objectives, such as ending disparities between rich and poor North Carolinians and giving further emphasis to preventive services.

The complexity of the state's modern health care system is demonstrated by its many different types of medical facilities, such as acute-care, rehabilitation, and psychiatric hospitals; nursing homes; assisted-living facilities; home health care services; and hospice centers. Administration of health care continues to be a joint responsibility of public agencies at the federal, state, and local levels and private organizations. The DHHS oversees several health-related agencies and state facilities, including the Division of Public Health (encompassing the Departments of Epidemiology, Health Statistics, Women's and Children's Health, and other agencies); the Division of Medical Assistance; the Division of Mental Health, Developmental Disabilities, and Substance Abuse Services; the Division of Aging; and the Office of Research, Demonstrations, and Rural Health Development. The North Carolina Office of the Chief Medical Examiner manages a statewide network of 600 physicians who serve as volunteer investigators in deaths involving unusual circumstances.

Federal Medicare and Medicaid legislation in 1965, and subsequent amendments, ushered in many changes in the health care industry. Medicare assistance for Alzheimer's patients was announced by President George W. Bush in April 2002. By assuming the responsibility of financing health care services for the elderly and the poor, the federal and state governments have become a major force in shaping the way the health care system will continue to operate. The Center for Medicare and Medicaid Services (formerly the Health Care Financing Administration) predicts that government sources will fund about 56 percent of the projected $3.2 trillion in domestic health care expenditures by 2008 as the population continues to age and the baby boom generation enters the Medicare program.