Part 2: Public Charity in the Colonial Era through the Nineteenth Century 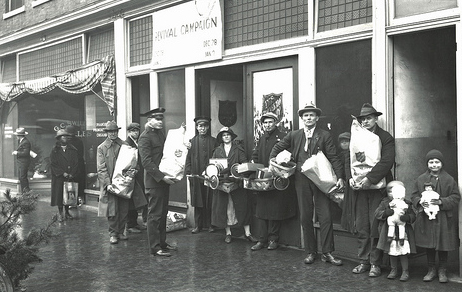 Attempts by the North Carolina government to alleviate poverty and assist the poor can be traced as far back as 1777. That year, the colonial Assembly provided for the election of county officials as "overseers of the poor," positions that previously had been held by local Anglican Church wardens, who, in addition to their other parish responsibilities, performed this duty under a statute based on the poor laws of England. Known after 1783 as "wardens of the poor," these officials were empowered to levy poll and property taxes for the benefit of the poor, who could be given small cash allowances or "let out under contract"-given room and board by private individuals (though county reimbursement often went to the lowest bidders). Although the amount of work and low pay made warden of the poor an unpopular job, later necessitating state laws to compel appointees to serve or face fines, these positions persisted into the late eighteenth century.

Specially constructed facilities for the poor, popularly (and officially) called "poorhouses," were first authorized under a bill passed by the state legislature in 1785. The law applied only to Northampton, Nash, Halifax, Chowan, Carteret, Wayne, and Onslow Counties, but within a few years other counties would adopt similar laws. In 1793 the General Assembly enacted a general law giving county wardens authority to erect poorhouses, although years or even decades would pass before some counties actually built them, probably deterred by fear that the system would not pay for itself. To assist in raising funds for poorhouses, the Assembly also passed a measure empowering newly appointed county wardens to collect any poor-tax revenues owed by former sheriffs, clerks of court, and others.

New enabling legislation in 1831 authorized the Court of Pleas and Quarter Sessions in each county to order the building of poorhouses when necessary. By that time, the practice of requiring inmates to perform farm labor and domestic work was gaining popularity among taxpayers and, coupled with the new legislation, led to a greater number of poorhouses.

Living conditions in poorhouses varied greatly from county to county, as indicated by Dorothea Dix's 1848 survey of 30 facilities housing many mentally ill citizens. Although Dix characterized the Iredell County facility as "a model of neatness, comfort, and good order, having a most efficient master and mistress," few others received similarly high ratings. She recalled a man in the Granville County poorhouse who had been chained to the floor for years, his "flesh and bones . . . crushed out of shape by the unyielding irons." To end such injustices, a state asylum for the mentally ill was opened in 1853.

Records of the Johnston County facility-called the "Poor House" or "Home of Aged and Infirm"-during 1890-95 indicate that residents usually numbered between 10 and 20, and separate houses were maintained for whites and blacks. Superintendent George S. Wilson was a local farmer who hired laborers to help run both the poorhouse and his own farming operation. The lack of paid cooking and laundry staff implies that able-bodied inmates performed such chores.

To reduce costs, some counties in the 1920s began to close their homes for the poor and board inmates in adjoining counties. According to a 1936 report, only 86 counties maintained homes for the poor, 49 of which did not meet the state's standards. By 1954 the number of counties with below-standard homes was down to 38. By the early 2000s, Beaufort was the only North Carolina county to operate a home for the poor. Privately owned and operated group care homes, licensed by the state, now serve the function of former county homes and poorhouses.

A. Laurance Aydlett, "The North Carolina State Board of Public Welfare," NCHR 24 (January 1947).

Robert S. Rankin, The Government and Administration of North Carolina (1955).