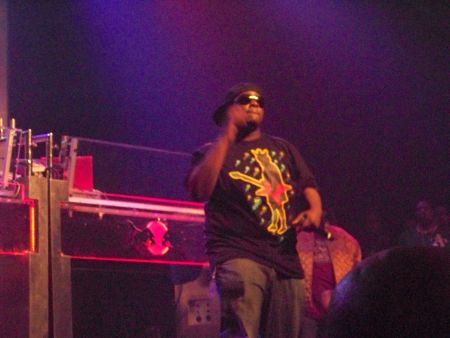 "Everybody prays for the day they see the light/
But the light at the end of the tunnel is a train/
Five dollar gas and poverty rates are rising much higher than your hourly rate/
So if you thinkin' 'bout quiting, you should probably wait/
Cause everybody gotta do a...job that they hate."
-"The Good Fight," Charity Starts at Home.

Phonte Coleman, or simply Phonte (also known as Percy Miracles or El Tigallo), is a Grammy-nominated rapper and singer from Greensboro, NC. He is best known for his down-to-earth perspectives on working-class life and the everyday struggles of the "everyman." His lyrics are especially meaningful in today's tough economy.

Phonte met 9th Wonder and Thomas Jones (Big Pooh) while attending North Carolina Central University in Durham, NC. He was an English major. The three formed the acclaimed alternative hip-hop trio Little Brother in 1998. They gained wide recognition when their first album, The Listening, was released in 2003 to critical acclaim. The album's success led to a non-exculsive deal with major label Atlantic Records.

While Little Brother was still together, Phonte established The Foreign Exchange with Dutch producer Nicolay. Their first album, Leave It All Behind, had a distinct rhythm and blues feel and was nominated for a Grammy.

Little Brother released their second album, The Minstrel Show, on the current state of hip-hop music, in 2005. The group would go on to produce another acclaimed album, Getback, in 2007. That year, 9th Wonder left the group and Little Brother left their label. The rest of the group officially disbanded in 2010.

On September 27, 2011, Phonte released his first solo effort, Charity Starts at Home as a part of "N.C. Hip-Hop Day." The album stays true to his introspcective, "9-5" style.