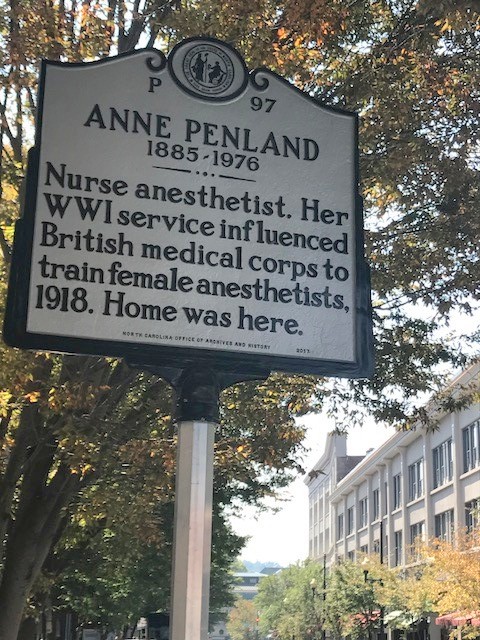 Asheville native Anne Penland graduated from the nursing program at Presbyterian Hospital in New York in 1912 and went on to complete advanced training in anesthesiology. Shortly after President Woodrow Wilson’s war declaration in 1917, Penland joined other medical professionals at Presbyterian in forming Base Hospital No. 2 and traveled overseas to support the Allied war effort as the unit’s nurse anesthetist.

Upon her arrival in England, Base Hospital No. 2 was attached to the British Expeditionary Force and sent to France. There, Penland and her colleagues split their time between casualty clearing stations on the frontlines and base hospitals behind the lines during World War I. At the time, the British medical department did not allow women to serve as anesthetists, but Penland’s expertise, poise, and ability to manage patients much larger than herself impressed British medical officers.

Reassured by Penland’s performance, the British consulting surgeons recommended to the leadership of the Royal Army Medical Corps the establishment of an anesthesiology training course for female nurses. Such a move, they argued, would free up male medical professionals for other work, alleviating the shortage of medical officers and rendering hospital staffs much more efficient.

Her influence on the decision is evidenced by a letter from Col. Herbert Bruce, a consulting surgeon for the Royal Army Medical Corps: “The suitability of nurses for this important work was made evident to the authorities by the practical demonstration of efficiency in the administration of anaesthetics shown by you and some other American nurses in C.S.S.’s (casualty clearing station) and base hospitals in France.”

The training course began in January 1918, the first class consisting of seventy-six Australian and British nurses who were divided mainly into groups of three and assigned to hospital bases for instruction. Two courses were held, with Penland serving as one of the instructors in both. Though less than half of the 159 nurses who passed the course went on to practice anesthesiology during the war, British medical command deemed the program an “unqualified success.”

Upon her return to the United States, Penland took up her old position as chief anesthetist at Presbyterian Hospital. She remained on staff, teaching students in anesthesiology, until her retirement in 1952. She was also a sixty year member of the Edward Buncombe Chapter of the Daughters of the American Revolution. She passed away in September of 1976 and was buried in the Penland family plot of Riverside Cemetery in Asheville, North Carolina.

Presbyterian Hospital in the City of New York, Forty-fourth Annual Report for the Year Ending Sept. 30, 1912

Lavinia Dock and others, History of American Red Cross Nursing(1922)

Virginia S. Thatcher, History of Anesthesia with Emphasis on the Nurse Specialist (1953), 99-100