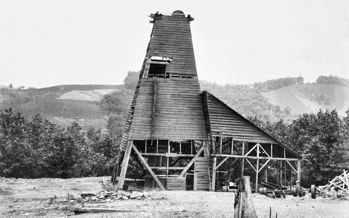 The Ore Knob Copper Mine in Ashe County was first conceived in the spring of 1854, when John Mason Lillard of Decatur, Meigs County, Tenn., channeled his resources into the organization of the Meigs County & Virginia Mining Company and the Decatur Mining Company. Lillard managed the original opening of the Ore Knob Copper Mine in 1855, when "four shafts were sunk on the property to depths of 90, 40, 30 and 40 feet and enough ore that assayed 19 percent copper was mined to make a profit of $9,400." But the distance of 63 miles over "poor mountain roads" to the nearest railroad prevented the mine from being profitable, and it was closed in 1856.

In January 1982 two bodies were found in the abandoned Ore Knob Copper Mine; Johnny Sands, known as the "Nashville Flame," wrote a popular ballad about the incident. The large, gaping entrance to the mine remains a forbidding reminder of the dangers-both physical and financial-of mining.

Lost in the mountains a week

Lost in the mountains a week ago stumbled onto the mine . The say an article about it in a magazine. Very interesting, however, have never read who the two people found in the mine were.

I once read that in the 1920’s. This mine produced more copper than any other mine in the USA. Is this true?

Thanks for the entry. I'm

Thanks for the entry. I'm still trying to find information on the "Mount Airy & Ore Knob Railroad" that was chartered and may even have been built. The line itself or at least the chartered company was acquired by the Cape Fear & Yadkin Valley or merged into the Western Railroad to form the Cape Fear & Yadkin Valley Railway about 1879. I hope you might be able to confirm or refine this information.

Would love to find a copy of

Would love to find a copy of the ballaf from the Nashville Flame.

Thank you for using NCpedia and for your inquiry! I've forwarded your information to Reference Services at the State Library of North Carolina's Government & Heritage Library. Their contact information may be found at https://statelibrary.ncdcr.gov/connect#GHL. Someone will be following up with you soon.