The General Assembly of 2001 named the Scuppernong grape as the official State Fruit (Session laws, 2001, c. 488). The same session law declared the strawberry and blueberry to be the state berries. 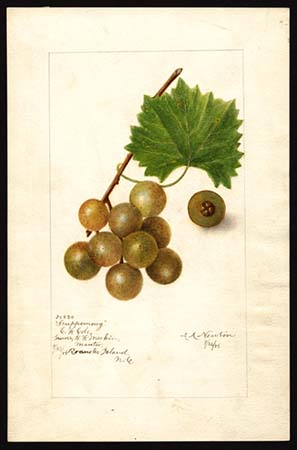 Selection as the State Fruit

The selection of the North Carolina state fruit and berries was an extremely long and contentious process. It began in February of 2001, when a class of fourth graders from Tommy’s Road Elementary School in Wayne county petitioned for the strawberry to become the official state fruit. Their proposal was sponsored by Rep. Carolyn Russell, and won the backing of the North Carolina House of Representatives. In September, however, fourth and fifth graders from Manteo Elementary School in Dare County presented a proposal to make the scuppernong grape the state fruit, backed by Sen. Fountain Odom of Mecklenburg. In October, the senate proposed compromise legislation making the Scuppernong grape the state fruit and the blueberry and strawberry the state berries. The compromise was brought back to the students of Wayne county, who rejected it. Eventually, after much debate between the House and the Senate, the grape/strawberry/blueberry compromise prevailed and went to Governor Mike Easley for his signature. The Wayne County strawberry supporters submitted a last effort for their cause, writing to the Governor and asking him to use his veto power to reject the bill. Nevertheless, on December 16th, the bill was signed into law.

The fruit debate occurred during the longest and most expensive legislative session in North Carolina history. Several congressmen at the time complained about how bills like the symbol proposals caused them to ‘fritter away’ time debating non-essential issues. Other legislators disagreed, citing the debate as an investment in activating young citizen involvement in the legislative process.

About the Scuppernong Grape

The Scuppernong (vitis rotundifolia) is a variety of muscadine grape, and has the distinction of being the first grape ever actively cultivated in the United States. It was named for the Scuppernong River, which runs from Washington County to the Albemarle Sound. Giovanni de Verrazano noticed this variety as far back as 1524, and explorers for Sir Walter Raleigh (or Ralegh, as it's sometimes spelled) in the 1580's sent back reports from the Outer Banks of grape vines that "…covered every shrub and climbed the tops of high cedars. In all the world, a similar abundance was not to be found." The Roanoke colonists are credited with discovering the Scuppernong "Mother Vineyard," a vine that is now over 400 years old and covers half an acre.

Whereas, North Carolina's economy originated and developed as an agrarian economy with a cornucopia of fruits and vegetables; and

Whereas, the State takes great pride in its rich heritage of farming; and

Whereas, there are still many families who base their livelihood in farming and who are continuing the North Carolina tradition of producing goods from our land; and

Whereas, one of the main sources of agricultural production in the State is the production of fruits and berries of several varieties; and

Whereas, North Carolina is the home of our nation's first cultivated grape, the Scuppernong; and

Whereas, British explorers in 1584 and 1585 reported to Queen Elizabeth and Sir Walter Raleigh that the barrier islands of what is now, in part, Roanoke Island were full of grapes and that the soil of the land was "so abounding with sweet trees that bring rich and most pleasant gummes, grapes of such greatness, yet wild, as France, Spain, nor Italy hath not greater…"; and

Whereas, Sir Walter Raleigh's colony discovered the famous Scuppernong "Mother Vineyard" on Roanoke Island, a vine that is now over 400 years old and has a trunk over two feet thick; and

Whereas, the State toast, penned in 1904, references North Carolina as the land "[w]here the scuppernong perfumes the breeze at night,"; and... 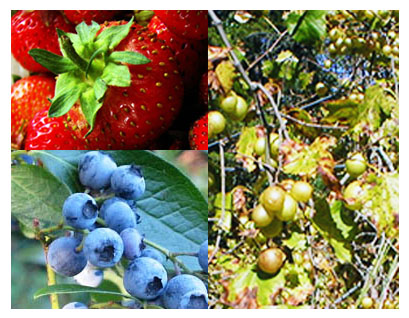 (a)       The official fruit of the State of North Carolina is the Scuppernong grape (Vitis genus).

(b)       The official red berry of the State is the strawberry (Fragaria genus).

(c)       The official blue berry of the State is the blueberry (Vaccinium genus)."

In the General Assembly read three times and ratified this the 5th day of December, 2001.