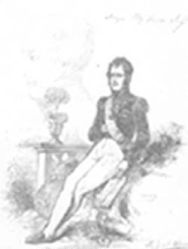 The Ney Myth, propagated by several North Carolina writers as fact but dismissed by historians as spurious, held that Rowan County teacher Peter Stuart Ney, who died on 15 Nov. 1846, was the assumed identity of Napoleon's trusted lieutenant Marshal Michel Ney, who was rumored to have escaped execution in 1815 and fled to America. This romantic legend held evident appeal for several generations of North Carolinians but, like many legends, had little basis in documented fact. Extensive research by William Henry Hoyt and others resulted in conclusive evidence that Marshal Ney did not escape the firing squad. The grave of Peter Stuart Ney at Third Creek Presbyterian Church in the town of Cleveland is located near the session house at which he taught classes.

James Edward Smoot, comp., Marshal Ney before and after Execution (1929).

"“Ney by Himself” From P.S. Ney’s copy of History of Napolean. Ney added a sketch and comments to the illustration." Image courtesy of Davidson College Archives.