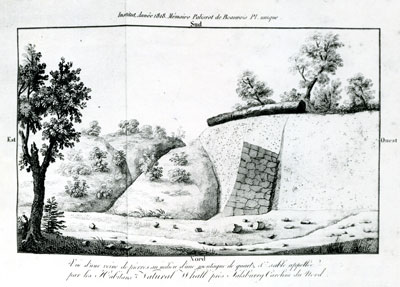 Natural walls in Rowan County, freshly exposed from subterranean sites by heavy rains in the summer of 1794, sparked widespread interest at home and abroad. They were discovered near Second Creek and South Yadkin River at several places ranging between three and nine miles east of the town of Salisbury. They appeared to be laid in a straight line. The top of the most fully exposed wall seemed to be made of stones carefully cut into blocks, fitted and held together by mortar of various colors. The wall measured about 22 inches wide at the top, slightly wider at the bottom, and 12 to 14 feet high. Locally, the material was called "black whin," and people who saw portions of the wall concluded that it had been laid by prehistoric people whom they called mound builders.

By 1881 the true nature of the wall was known, although at various times throughout the next century newspapers continued to repeat the old beliefs. The wall was formed naturally of traprock, which is found in a dozen North Carolina counties. It originated as magma of volcanic origin and consists of basalt, diabase, and gabbro, identified by Jasper L. Stuckey, state geologist, as including "dense, dark-colored, and fine-grained igneous rocks" that form distinctive joints on cooling.

MD/chemist James Woodhouse of the U of
Pennsylvania determined in 1798 by chemical analysis that the wall material was basalt of natural origin. (Chemical Heritage,v31, n2, summer 2013)