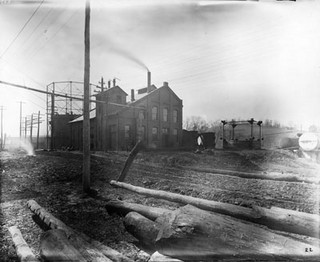 Natural gas is an odorless, colorless mixture composed largely of methane that became in the twentieth century one of North Carolina's most important energy sources. The U.S. Department of Energy lists North Carolina as one of the states with no producing natural gas wells, and no proved underground reserves. The Southwest, primarily Texas and Louisiana, including the Gulf of Mexico, holds vast reserves. By 1900 natural gas had been discovered in 17 states, but without means of transportation, its use was limited. When found with oil or coal, the gas was often simply vented.

Some North Carolina cities acquired manufactured gas in the 1850s. Organization of the Wilmington Gas Light Company in 1854 brought gas streetlights to that city. Charlotte added gas streetlights in 1858, and that same year the Raleigh Gas Light Company lit the capital's streets. Gas fixtures went into buildings under construction, such as the Dorothea Dix Hospital. In January 1859 the General Assembly voted to install gas lights in the executive mansion.