Museum of the Cherokee Indian 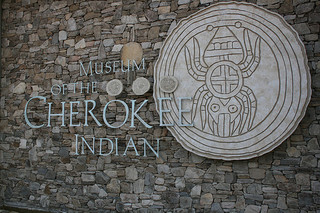 The Museum of the Cherokee Indian, established in 1948, was originally housed in a log building on the Qualla Boundary of the Eastern Band of Cherokee Indians. The initial collection of the museum was comprised of artifacts donated by Samuel E. Beck, a local Cherokee businessman who had profited during the early days of tourism and had long been interested in preserving the Cherokee heritage. Later the museum added the Kirksey collection of Union Mills, N.C., the Weatherly Collection of Grant, Va., and the artifacts of noted ethnologist Frank Speck. In addition, thousands of Cherokees made individual contributions. Tom Underwood originally ran the museum, while Mose Owle served as curator and chief lecturer.

In 1958 a fire destroyed the old building, but the museum artifacts had been in storage in a separate building and were consequently spared. While plans were being made for the lengthy task of raising funds to build a new facility, the museum reopened in a building belonging to the Cherokee Historical Association, which had purchased the museum in 1952. In 1976, after many years of work-and with the financial help of the Economic Development Foundation, a North Carolina Legislative Grant, the Cherokee Historical Association, the Z. Smith Reynolds Foundation, the Percy B. Ferebee Endowment, and the Hillsdale Fund of Greensboro-the new building opened its doors.

The new Museum of the Cherokee Indian, enlarged and renovated in 1998, is one of the most modern facilities of its kind in the United States and houses the greatest collection of Cherokee artifacts in existence. Through audio-visual exhibits that rely heavily on computer-generated graphics and other special effects, visitors can learn about the sacred myths and legends of the Cherokee, hear the Cherokee language spoken, and follow the story of the Cherokee people from their prehistoric origins to the Trail of Tears and the subsequent history of the Eastern Band of Cherokee Indians.