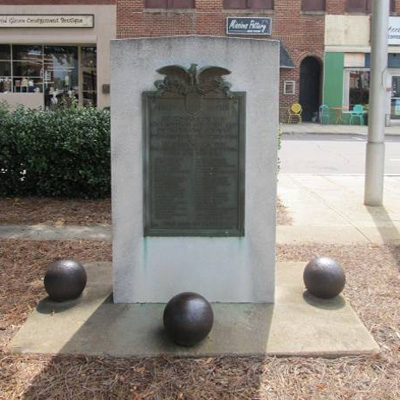 WWI Memorial
Lexington
View complete article and references at Commemorative Landscapes of North Carolina at: https://docsouth.unc.edu/commland/monument/51
Description: This memorial consists of a bronze tablet mounted on a granite base that lists the names of the thirty-nine residents of Davidson County that died in or as a result of World War I. The monument includes the names of African American soldiers, although they are separated from the list of their white counterparts. Around the base of the memorial are several cannon balls. As early as April 16, 1919, Davidson County wanted to commemorate the service and deaths of those citizens that had fought in WWI. They planned and raised funds for two celebrations, promising the leftover money to the memorial fund. Initial planning began in June of the same year with the meeting of a memorial committee and the idea of creating a memorial hospital. The second of the two planned celebrations never occurred, and the money raised was given to the memorial association. By October of 1921, the association had determined that the memorial would be monument of sorts (not a hospital) placed in Lexington Square, but the plan of the bronze tablet on granite marker was not finalized until December.
Inscription:
1917-1919 IN HONOR OF THE / NINE HUNDRED AND THIRTY MEN / OF DAVIDSON COUNTY / WHO SERVED IN THE WORLD WAR / AND / IN MEMORY OF THE / FOLLOWING MEN WHO GAVE THEIR / LIVES FOR THE FLAG / JESSE L. BARKLEY - ODELL BARNES / W.M. BAZEMORE - HARVEY BRILLES / GEORGE W. BROADWAY- C.C. COOK / BEN W. CORNELIUS - FRITZ CREAKMAN / D.C. CULBRETH - JOHN H. EASTER / RAYMOND ELLIOTT - ROBERT LEE BRITTS / ERNEST GURDNER - H.D. HARRIS / CHAS W. HARRISON - N.M. HOPKINS / ARTHUR W. HOWELL - LLOYD IRVIN / ALBERT A. LINEBERRY - CARL LINK / FRED G. LOOKABILL - JOHN CARL MILLER / WILLIAM ALBERT MILLER - JNO. A MYERS / THOMAS GURNEY NANCE - IRA POSTON / NELSON RAYFIELD - ADLAI STEVENSON / HARRISON SULLIVAN - J.R. SURRATT / W.P. SURRATT - OLIVER THOMASON / TRAVIS THOMPSON - HENRY V. TRAYNHAM / ERNEST WEAVER - FRED WELCH / HAYMORE WESTMORELAND / COLORED / WILL HARGRAVE - JAMES FRANKLIN LOPP / -PRO DEO ET PATRIA-
Dedication date: 7/4/1922
Materials & Techniques: Granite marker, bronze tablet
Sponsor: The monument was paid for by county, city, and civic organizations. However, the most prolific and active sponsor of the memorial was chairman of the memorial association, J.R. McCrary.
Cost: $500
Post dedication use: The monument was moved as other markers were added. As it is located in the town square, the monument and its surroundings have been part of many celebrations.
Subject notes: The statue is dedicated to all soldiers from Davidson County that fought in WWI, but especially the thirty-nine that lost their lives.
Location: The monument lies in the center of Lexington, NC in the northeast quadrant of Lexington Square, formed by the intersections of Main and Center Streets. The northeast quadrant is also home to markers commemorating World War II, the Korean War, and the Vietnam War. Other quadrants include markers to the county's centennial, Benjamin Merrell, Daniel Boone, and Nathanial Greene. The County Courthouse is located in the southeast quadrant.
Former Locations: The marker was originally placed in the center of the northeast quadrant, but was moved to the side in the late 1940s or early 1950s to make room for the World War II marker when it was added.
City: Lexington
County: Davidson
Subjects: World War I
Latitude:
35.82403
Longitude:
-80.253
Subjects:
Monuments
Places
Authors:
Commemorative Landscapes of North Carolina
Origin - location:
Davidson County
Lexington
From:
Commemorative Landscapes of NC, University of North Carolina Chapel Hill.