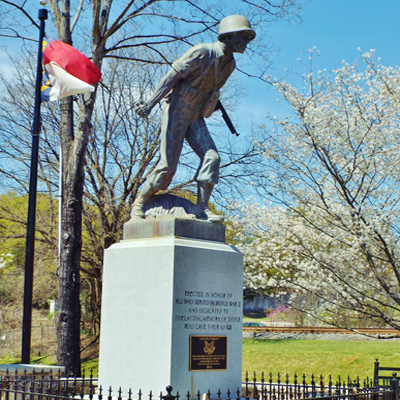 Description: The monument is a copper-plated zinc casting of a life-sized World War II soldier in combat gear. He leans forward, seemingly preparing to hurl the grenade he holds in his right hand. The sculpture rests atop a seven feet high tiered granite plinth bearing the inscription on the front face.

Nickname: "Spirit of the Fighting Yank"

Inscription:
ERECTED IN HONOR OF / ALL WHO SERVED IN WORLD WAR II / AND DEDICATED TO / THE LASTING MEMORY OF THOSE / WHO GAVE THEIR LIVES.

Dedication date: The statue was dedicated in 1946.

Materials & Techniques: The monument is composed of a copper-plated zinc statue resting atop a granite plinth. Restoration of the broken head utilized copper-plated zinc and required painting to match the patina of the existing statue.

Subject notes: In July of 2011, the statue was vandalized and toppled and the head stolen. Three teenage boys from Mt. Holly were subsequently arrested and confessed to the crime, admitting that they had taken the statue's head and thrown it in Dutchman Creek in Mt. Holly. The head was recovered from the creek by divers from the Gastonia Police Department. It was badly damaged and required restoration which was completed by Conservation Solutions, Inc. at a cost of $30,000. Insurance and donations funded the restoration, and the monument was re-installed in front of the middle school.


The "Spirit of the Fighting Yank" sculpture in Belmont is one of four, or possibly five, created by E. M. Viquesney in the 1940s. Four others are installed in Chicago, Illinois, Port Huron Michigan, and Oil City, Pennsylvania. Viquesney mass-produced statues and corresponding collectible miniatures from the 1920s to the 1940s, with the World War I Doughboy becoming perhaps his most well-known creation and securing his renown as a sculptor of World War I and World War II soldier figures.

Location: The statue sits in front of the Belmont Middle School at the corner of North Central Avenue and West Myrtle Street.

Former Locations: The monument was originally placed in front of the Belmont High School in 1946.

Landscape: The statue sits on the lawn, steps from the sidewalk and with mature shade trees behind.